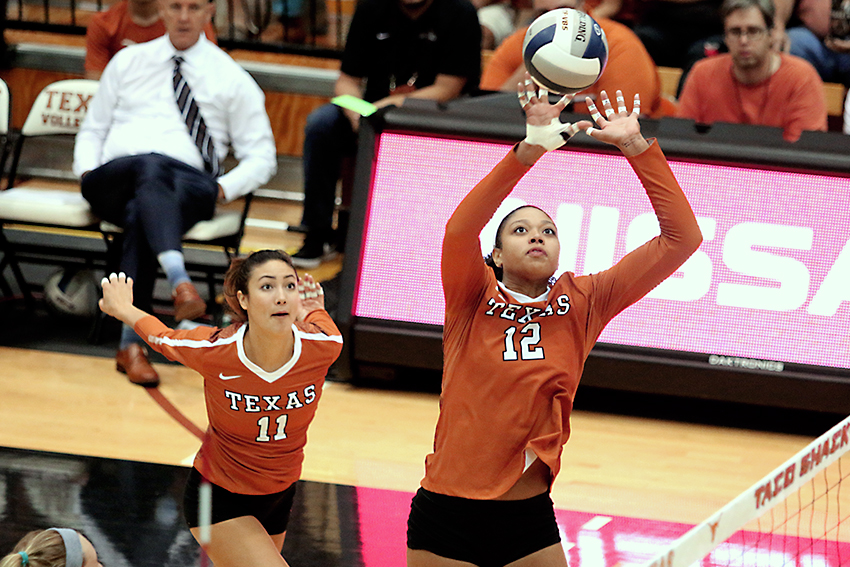 Junior middle blocker Morgan Johnson elevated above the net, drilling the ball down the heart of the Kansas State defense with a thud that echoed through the stands at Gregory Gymnasium.

The ball made a beeline for the hardwood, landing just past the outstretched hands of the diving Wildcats and igniting a roar of applause from the crowd. Johnson pumped her fist, feeding off the electric atmosphere.

Moments like that seemed to replay on a loop on Saturday afternoon as No. 5 Texas swept Kansas State 3-0.

The Longhorns were aggressive from the start, recording 17 kills at .531 percent in the first set. Sophomore outside hitter Micaya White led the charge with four kills in the 25-17 victory.

Defense was the house special in the second set, as Texas gave the Wildcat attack fits with five blocks in the 25-12 victory. Senior middle blocker Chiaka Ogbogu got in on the action, tallying 1.5 blocks.

In the third set, Texas combined its stingy defense with offensive firepower, cruising to a 25-16 victory. The Longhorns didn’t have to sweat much in dispatching the Wildcats, advancing to 11–2 (3–0 Big 12) on the season.

“There’s no complaints from any facet of the game,” head coach Jerritt Elliott said. “I thought we were good in every aspect. As a result, it was a very good performance and a good 3-0 win.”

White finished with a team-best 14 kills and 10 digs, marking her third double-double in the past five matches. But it was Johnson who most efficiently exploited the holes in the Kansas State defense, tallying eight kills at a season-high attack percentage of .889.

“Morgan is the player that (opponents) ignore a bit more,” Elliott said. “But what they don’t know is how much punishment she can do. You better respect her, or she’ll put up numbers.”

The Longhorns never trailed against the Wildcats — an impressive showing that they hope to display more and more as they reach the halfway point of the season.

“After going five (sets) at West Virginia, we kind of met with ourselves and decided that when we’re up we’re going to stay up,” senior outside hitter Ebony Nwanebu said. “We’ve applied that in the last two games since then.”

After a short two-game homestand, the Longhorns now prepare to hit the road and begin a challenging stretch of three matches in six days.

“It’s a brutal week,” Elliot said. “There’s a lot to be said in that one week of play, so we’ll have to do a good job as a staff to make sure everyone is rested and feeling good.”

But Texas enters this daunting week on a five-game win streak, and the Longhorns look as ready as ever to take on the challenge.

“It’s just a matter of buying into the system,” Johnson said. “Our hard work is paying off, and we’re starting to hit our stride.”