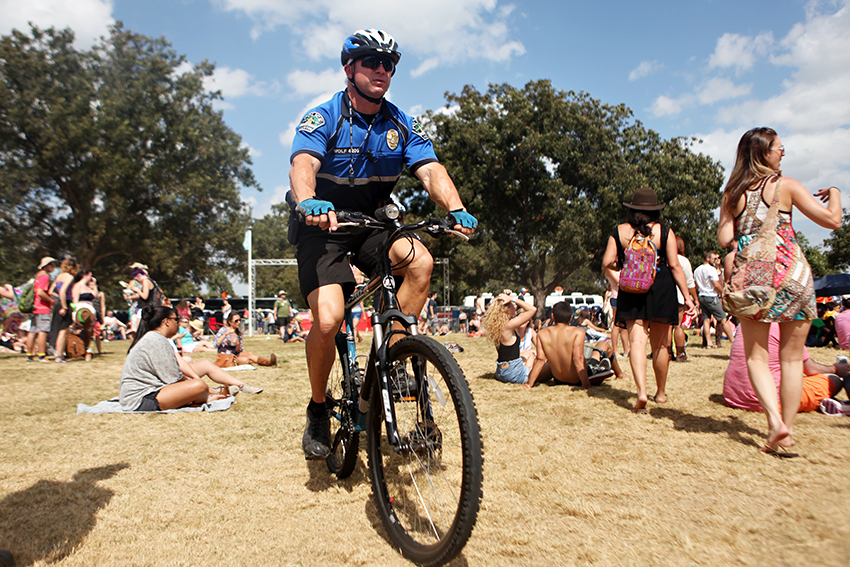 “We live in a world now where you cannot protect against every single threat,” Manley said. “We’ve seen that with people getting into vehicles and driving them into crowds. We’ve seen that in what we saw in Las Vegas last night. As a police department and with all of our partners — state, federal and local — we are working to address every threat possible.”

The shooting in Las Vegas occurred when a gunman fired on a crowd of 22,000 people Sunday night at the Route 91 Harvest music festival from the 32nd floor of a nearby hotel, leaving at least 58 people dead and more than 500 injured. Manley said the attack has raised city-wide safety concerns for ACL, which is held in Zilker Park, overlooked by buildings of downtown Austin.

“We are reevaluating the plans in place that we have used in the past, and we’re strengthening them in some areas,” Manley said. “We can’t come in on the day after an event like we just saw happen in Las Vegas and not reconsider our plans and make sure that we are comfortable.”

APD has reached out to federal and state law enforcement and is anticipating assistance in policing the event from both, Manley said.

Ivon Hernandez, communication and leadership freshman, said she is reconsidering attending ACL because she is not sure whether it is possible to ever be safe from attacks like in Las Vegas.

“Many people are not confident in society and the police when it comes to safety,” Hernandez said. “Events like Las Vegas remind us that tragedy is possible no matter how many police officers are present.”

No credible threats have been made regarding an attack targeting ACL, Manley said.

“To turn on the news every single night and to see what we see happening is heartbreaking,” Manley said. “As a law official, we get into this business in pursuit of (not only) public safety but quality of life as well.”

Manley said although APD is doing everything it can to ensure safety at ACL, people can take steps to increase their own personal safety.

Undeclared freshman Louis Huynh said he does not think what happened in Las Vegas will deter students from going to ACL.

“Austin is considered a low crime rate city,” Huynh said. “I think students who know exactly how ACL works will not have a hard time trusting APD with their safety.”

Biology junior Pauline Aegerter said although Las Vegas is a reminder of potential safety concerns at large events, fear will not keep her from going to ACL.

“I can’t let fear drive my every move,” Aegerter said. “I’d rather trust that the APD will do their job, as they have for every year I’ve gone, than sit at home and not have fun.”

Despite the safety concerns the community has expressed, Manley encouraged people to attend ACL as planned.

“This is a yearly event that we have successfully managed here in Austin,” Manley said. “It has been conducted with safety and it is important that we continue to do those things that we enjoy.”