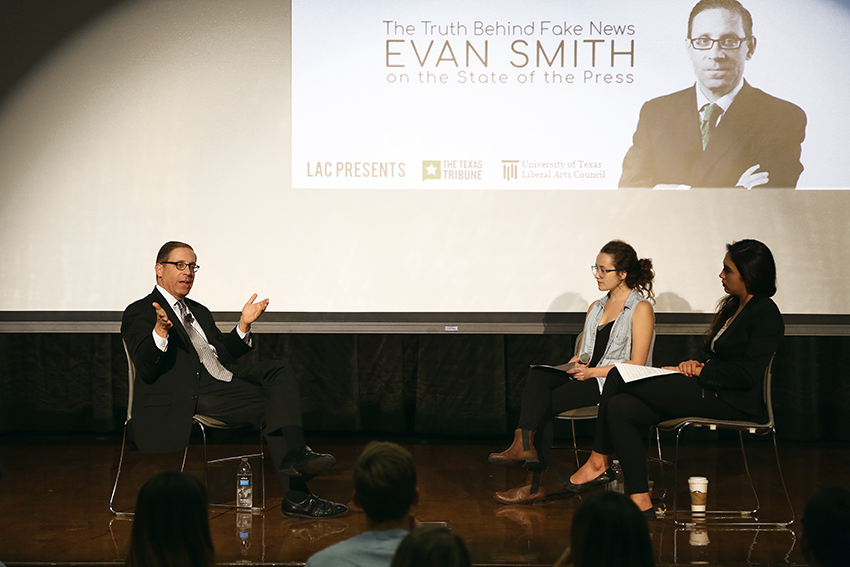 President Donald Trump is consciously attempting to diminish the public’s faith in the media by calling real journalism fake news, said Evan Smith, CEO and co-founder of the Texas Tribune, during a lecture on Wednesday.

“Calling everything he doesn’t agree with or is written fake news makes it so that when journalism uncovers damning things about him or his administration, his hope is that the public will say that it’s fake news,” Smith said. “He’s basically pre-budding the argument.”

Smith gave “The Truth Behind Fake News” lecture as part of the Liberal Arts Council’s speaker series. LAC president and government junior Jordee Rodriguez said she invited Smith because of his experience with gathering verifiable information in the industry.

“I think its important for people to know how fake news came about,” Rodriguez said. “It’s important to understand how it’s affected society at large right now and how it’s contributing to the division of political ideologies, political bodies and our nation as a whole. I know that’s kind of cliché, but it’s true.”

In regards to actual fake news and facts found on social media, Smith said the problem is people pretending to be other people or groups and creating and sharing fake content.

“People are consciously masquerading as other people and other things,” Smith said. “I think anonymity gives people the opportunity to be dangerous cowards and say things that they wouldn’t say in public or would say with their names attached to advance an agenda in a way that is fundamentally dishonest and destructive.”

Smith also said it is important to not live in an echo chamber and only follow people who share your beliefs.

“I think there is a really big confirmation bias,” public relations freshman  Greta Silvertooth said.  “I think that’s true especially for people my age. Everyone just follows who they agree with, and they don’t care to look further and see why people believe what they believe.”

Ending his lecture, Smith said it is important for future journalists not to shy away from pursuing journalism as their professional careers.

“It’s a tough time, but you’ve got to keep doing the work that you do,” Smith said. “Don’t get discouraged by people telling you this is the worst time to be in the business. The world needs you, and this is important work. Don’t shrink from the responsibility you have in finding the way forward.”