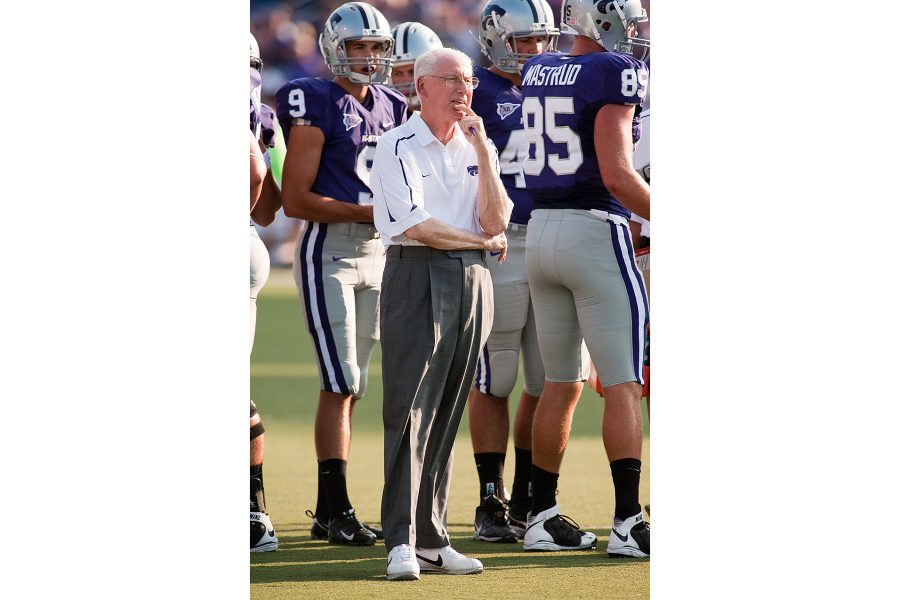 A college football legend, sporting thin-wired frames and a pair of his classic Nike Cortez sneakers, will walk the Kansas State sideline of Darrell K Royal-Memorial Stadium on Saturday.

Kansas State head coach Bill Snyder will lead his team onto the field in the midst of his 26th season with the Wildcats. But Snyder’s squad hasn’t always been known for their discipline and physicality, not before what is widely known as the greatest turnaround in college football history.

Kansas State, who hadn’t won a game since 1986, was thought to be the worst team in college football. However, when Snyder arrived after the 1988 season, he said he didn’t realize the severity of the situation until his first team meeting in the locker room.

In an era where programs were allotted 95 player scholarships, only 47 players walked into the locker room for the team meeting — the lowest number of scholarship players in the entire country.

“Of course, I knew that I was in for a big challenge, but I don’t think it fully hit me until that moment,” Snyder wrote in the Players’ Tribune. “This was a program that had struggled for decades to find success. We were on the cusp of being demoted to Division II.”

“They’d actually left that detail out until after I took the job,” Snyder wrote.

Kansas State mustered one win in Snyder’s first season in the Little Apple of Manhattan, Kansas. It was an improvement from the previous season, a small one, but one Snyder knew he could build upon.

By Snyder’s fifth season, Kansas State won a bowl game, just five years after a winless season. But that was just the beginning of the Wildcats’ rise. They put together six 11-win seasons from 1997–2003.

After two-straight losing seasons, Snyder retired in 2005. But it didn’t last long. Snyder returned to the program in 2009 after Kansas State suffered from two-straight 5–7 seasons and brought the Wildcat program back, again.

“There’s probably not a coach in our profession right now that is more well respected than Bill Snyder,” head coach Tom Herman said. “Unbelievable job in what he has done there. It probably gets said every week of every year, but to take literally the worst college football team in the history of college football and turn it into what he has turned it into is remarkable.”

In 2016, Kansas State capped off a 9–4 season with a victory over Texas A&M in the 2016 Texas Bowl. However, Snyder was just beginning a different battle. This time, it was off the field. Snyder announced that he was diagnosed with throat cancer on Feb. 13.

Talks of retirement and the end of a long, illustrious career hovered over the Kansas State program. Those talks ended when Snyder stood on the sidelines of the Bill Snyder Family Stadium during Kansas State’s spring game just two months later.

The coach successfully finished his 33 treatments last spring and will celebrate his 78th year at Darrell K Royal-Memorial Stadium for the Wildcats’ Big 12 matchup with Texas. And it appears he’ll receive a warm welcome from junior linebacker Malik Jefferson.

“Happy birthday, Coach, that’s all I can say,” Jefferson said. “Coach Snyder is a great man. When he had that cancer situation and he was still out there coaching that just shows how much he cares. I always come in and try and shake his hand … it’s really, really great to see he’s healthy.”

Snyder rarely discusses his plans for the future, but whether this ends up being his last season or not doesn’t matter — his legacy in college football is here to stay.