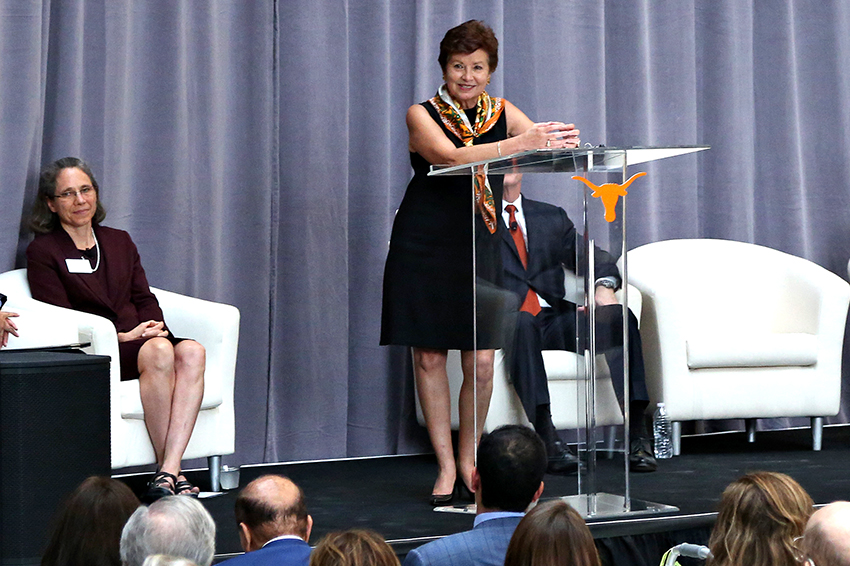 As a young girl from Laredo, Texas, Sara Martinez Tucker never imagined she would become the newest chairman of the UT System Board of Regents.

She was once told by a guidance counselor that she was not “college material,” but with the support of her parents, Tucker went to college, made a career for herself and even served as under secretary of Education in former President George W. Bush’s administration.

“It is never what I imagined that my life’s work would be about,” Tucker said. “Like many kids who are first in their family to go to college … you don’t have a lot of inspiration for what is possible with careers.”

In her new position, Tucker hopes to help students from humble backgrounds achieve the life they desire through a college education, like her.

“To many kids in my community, their heritage is their destiny,” Tucker said. “I want every kid that grew up like I did to be able to have the education they want.”

Tucker said she had to overcome obstacles many students still face to get to her now fulfilling career. First, as an undergraduate student at UT, Tucker realized schooling in towns like Laredo often left students like her “underprepared and underfunded.”

After finishing her journalism degree, Tucker found herself in a job she didn’t want and returned to UT for a business degree. In retrospect, she said, her first career choice had been determined by a lack of knowledge of careers and a single event in her life.

“I won a UIL award for feature writing, so I just thought, ‘Well, maybe I’m just destined to be a reporter,’” Tucker said. “I did work as a reporter, and then I figured out, ‘I don’t know if this is what I want to do for the rest of my life.’”

Tucker ended up working as a corporate executive for AT&T with her business degree. Tucker said she found a life completely different from Laredo that she enjoyed.

Since her retirement from AT&T in 1996, expanding career options and preparation for Hispanic and Latino students has been a priority for Tucker, who also served as CEO of the national Hispanic Scholarship Fund for nine years.

“It is personal to me because I don’t want kids to rely on luck to have the outcomes that I have had in my life,” Tucker said.

Tucker returned to Texas to be closer to her family after serving as under secretary of the U.S. Department of Education. Tucker was appointed as UT System regent two years ago and will now set the agenda for the UT System Board of Regents as the newest chair, elected in September.

Tucker said she tries to honor her parents, Viola and Ernesto Martinez, as an advocate for students and their families through her work in higher education. One of her favorite memories is of her parents visiting her at UT for the first time.

“I will always have that moment in my heart,” Tucker said. “I was excited, and I was walking really quickly, and they were just standing there looking. My dad had tears in his eyes and said, ‘It never occurred to me that I would have my daughter at the best university in the state.’”