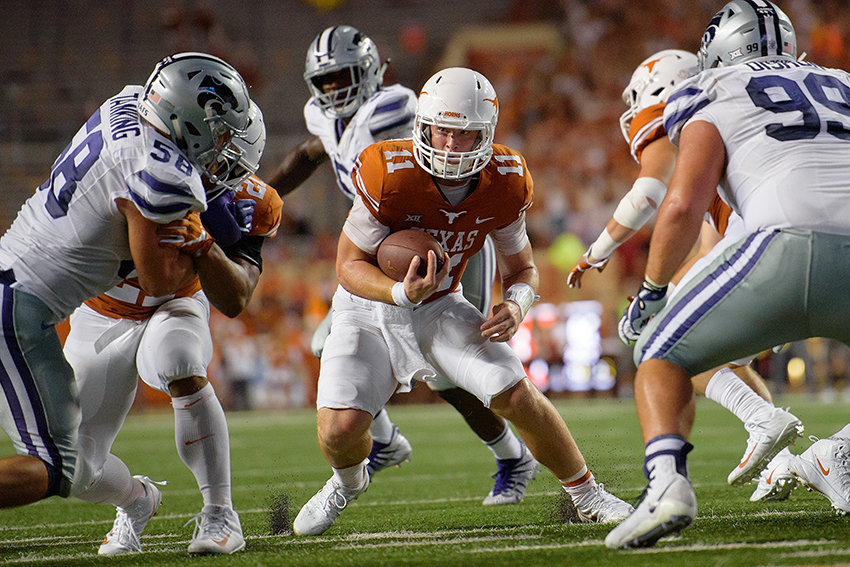 Head coach Tom Herman said he won’t announce Texas’ starting quarterback anytime soon during Monday’s press conference. He has stuck to his word so far, and so has offensive coordinator Tim Beck.

Here’s what Beck and defensive coordinator Todd Orlando had to say during Wednesday night’s media availability.

The foggy quarterback situation hasn’t fizzled out after five games, but it seems like one quarterback currently has a much stronger case than the other. And it’s not sophomore Shane Buechele.

Buechele’s last appearance came on Sept. 28 when the Longhorns left Ames, Iowa, with a 17-7 win over Iowa State. Texas later confirmed that the sophomore quarterback sustained a sprained ankle during the victory over the Cyclones, and Longhorn fans haven’t seen him since.

Two weeks have passed since then, and the Longhorn faithful isn’t exactly begging to see Buechele in Saturday’s AT&T Red River Showdown in Dallas. They seemingly want more of the 6-foot-2, 230-pound freshman quarterback Sam Ehlinger, who put his best foot forward with his most recent performance in Texas’ double-overtime victory over Kansas State last Saturday.

“At this point, (Ehlinger)’s played really well,” Beck said. “I’m not down on Shane’s play. I don’t think that Shane has played bad. I think right now Sam is the hot name. I know all the media and the fans and everybody feels that he is the guy.”

Sam is the “hot name” for a reason. Throwing for 380 yards and rushing for 107 more in a double-overtime victory will do that.

“He made a lot of plays and plays with a lot of passion,” Beck said. “That’s one thing, a lot of juice, he brings that to the offense, and I like that.”

Although the majority of Austin seems to be on the Ehlinger bandwagon, don’t expect Herman or Beck to announce their starting quarterback until game time.

Junior linebacker Malik Jefferson’s job is secure. That isn’t up for debate.

Jefferson’s 10-tackle performance on Saturday night against Kansas State doesn’t even tell the full story. Orlando said Jefferson is simply carrying himself in a different way, becoming more of a vocal leader and taking pride in the physicality of the Longhorns’ new defense.

“Those are the things that I’ve seen improve the most out of him, just the way that he’s carrying himself and the respect that he’s starting to get with his teammates,” Orlando said. “When he sees something that he doesn’t like, whether it’s on the practice field or in a meeting room, he’s gonna say something, and those kids will respond to it.”