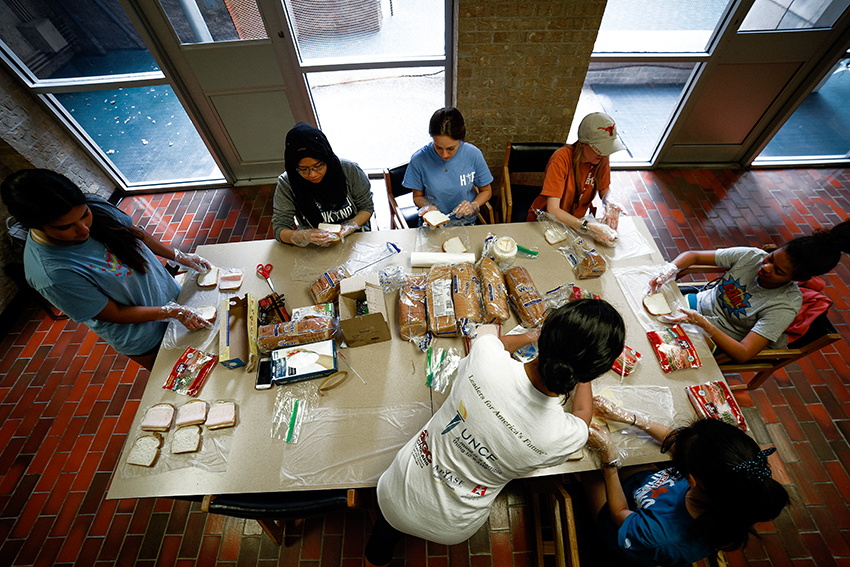 Over 2,000 people deal with homelessness in Austin, according to a 2017 count by the Ending Community Homelessness Coalition.

“A lot of people don’t look at homeless people,” said Robert Diaz, an aerospace engineering sophomore and Humanity First officer. “It’s not the biggest concern here in Austin, even though there’s such a huge population that is homeless.”

“We’re walking down the street, and if we see someone who’s not homeless, we treat them with respect,” Al-Kassem said. “But when we see a homeless person, we avoid their gaze and act like they’re not there. That really just makes it (seem) like they’re an object, not a human.”

“It’s really demoralizing for people who are trying to get back on their feet,” Gonuguntla said. “Homelessness is not something that’s necessarily due to poor decision making. Some are just very unfortunate to be in that position. This is an opportunity for us to show (the homeless) that they’re people.”

Based on his experience volunteering last year, Diaz said the homeless population is very appreciative of the organization’s giving efforts.

“Once you go out there and you give these things to people, they’re so appreciative,” Diaz said. “And then you talk to them and they tell you about their lives. It’s an amazing experience.”

Public health freshman Eshani Kishore said events like this are important because college students often live in a bubble and forget about the outside world.

“These events remind us of the importance of giving back and doing little things that, to us, might not seem that significant,” Kishore said. “Like writing notes on postcards is not really a big deal for us, but it does mean a lot to other people.”