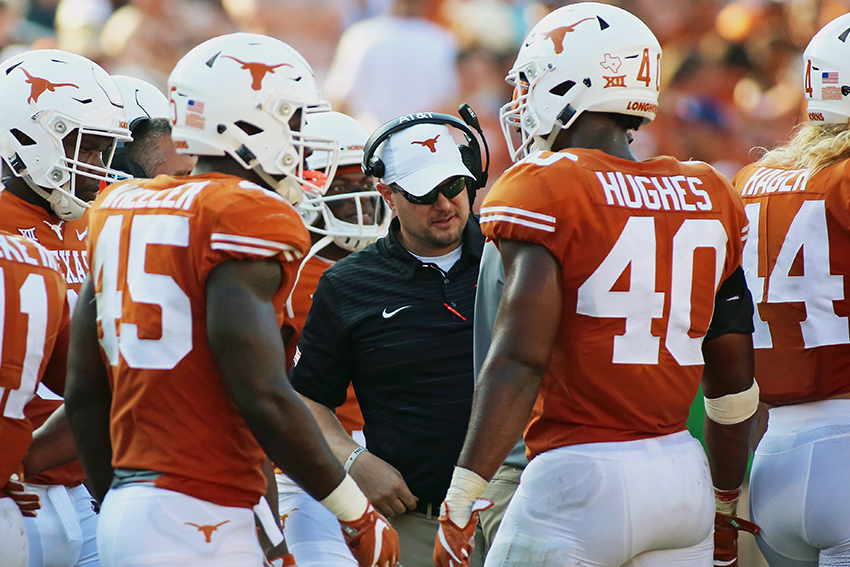 Head coach Tom Herman met with the media on Monday for his weekly press conference to discuss a multitude of topics following Texas’ 29-24 loss to Oklahoma at the Red River Showdown. Here are two notes from Monday’s press conference.

Concern over Ehlinger’s workload in the running game

Through six games this season, the Longhorns’ leading rusher is junior running back Chris Warren III. But freshman quarterback Sam Ehlinger, who has played in just four of Texas’ six games, trails in second by just three yards.

Ehlinger’s ability in the running game has set himself apart from sophomore quarterback and opening-day starter Shane Buechele. Ehlinger has rushed for 271 yards and a touchdown on 68 carries. Warren leads the team with 274 yards.

In Texas’ past two games alone, Ehlinger has carried the ball 42 times and rushed for a whopping 213 yards. For Herman, the heavy workload for the true freshman is a bit of a quandary.

“I worry about it,” Herman said. “We don’t want our quarterback carrying it 20, 22 times. Now if you got to have it to win the game, we’re gonna do whatever it takes to win the game.”

Herman said he spoke with Ehlinger on Sunday about improving his pocket presence and staying in the pocket longer, as opposed to looking to run at the sign of any pressure.

“(Ehlinger)’s like a wild horse right now that you’re trying to tame,” Herman said. “But you don’t want to take away his energy and one of the things that really makes him so effective.”

Herman trusting the process despite 3-3 record

On Monday, Herman was asked if his players can see progress despite a 3-3 record and close losses to two teams who once sat in the top four — USC and Oklahoma.

For much of his press conference on Monday, Herman discussed the big picture, noting how Texas is still trying to build a program after years of “mediocrity.” He praised his team’s effort level and toughness. Herman remained optimistic about the process, but refused to state any bold expectations as for how the Longhorns should finish this 2017 season.

“I think the beauty of having such a difficult schedule is that (the players) do stay engaged,” Herman said. “The engagement’s not the problem.”