Tattoo lovers have come to relish Friday the 13th. Shops across the country offer discounted tattoos for the price of only $13, provided they incorporate the number into the designs. The leads to some typical spooky designs in addition to more off the wall, high-concept ideas, but none of the tattoos are as interesting as those being tattooed. 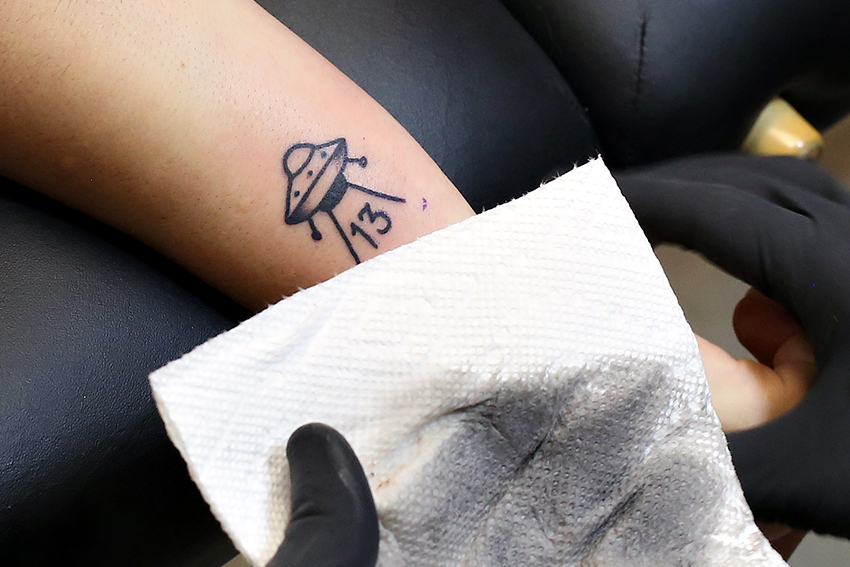 18-year-old Luna Trevino identifies with things out of this world. For this reason, she chose a UFO for her Friday the 13th tattoo.

“It’s Friday the 13th so I wanted to get something a little spooky” Trevino said. “I don’t know, I’m a huge fan of Ancient Aliens and shows like that, so I figured it’d be good fit.”

Trevino embraces the interstellar, not just because she finds it interesting, but also because it is in her name. 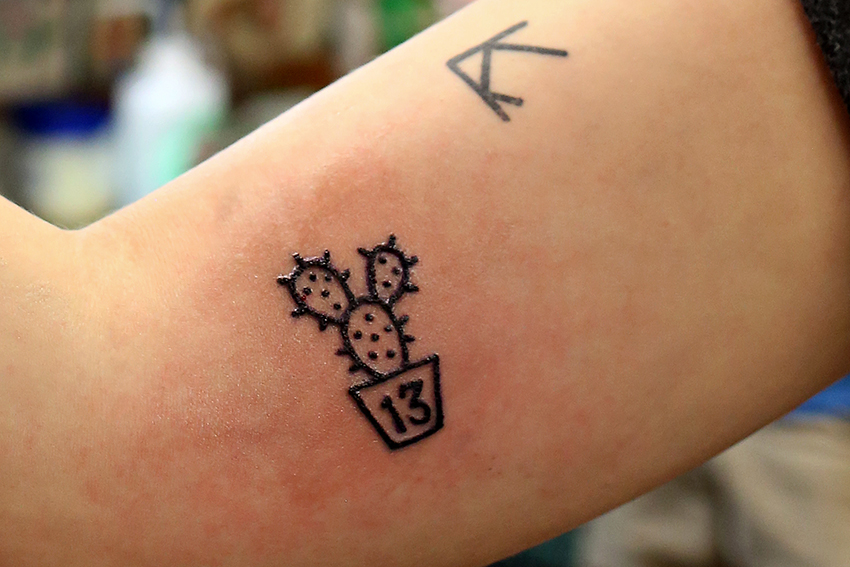 Twenty-three-year-old Emily Knesek is new to Austin. Originally from Cleveland, she moved here to live in the house left by her late grandmother.

Knesek has spent much time in Austin tending to the garden that was left behind with the house. Because of this, she got a cactus for her Friday the 13th tattoo.

“I feel like I’m honoring her when I plant,” Knesek said.

Although the tattoo has been an idea she’s had for a while, she said actually getting it is kind of a sudden thing. Having only learned about Friday the 13th tattoos from her girlfriend the day before, Knesek thought the tattoos had to be related to the Friday the 13th horror movies. She said she was excited to hear otherwise.

“I heard it about yesterday, honestly,” Knesek said. “I was just like, ‘I’m gonna wake up and do it.’” 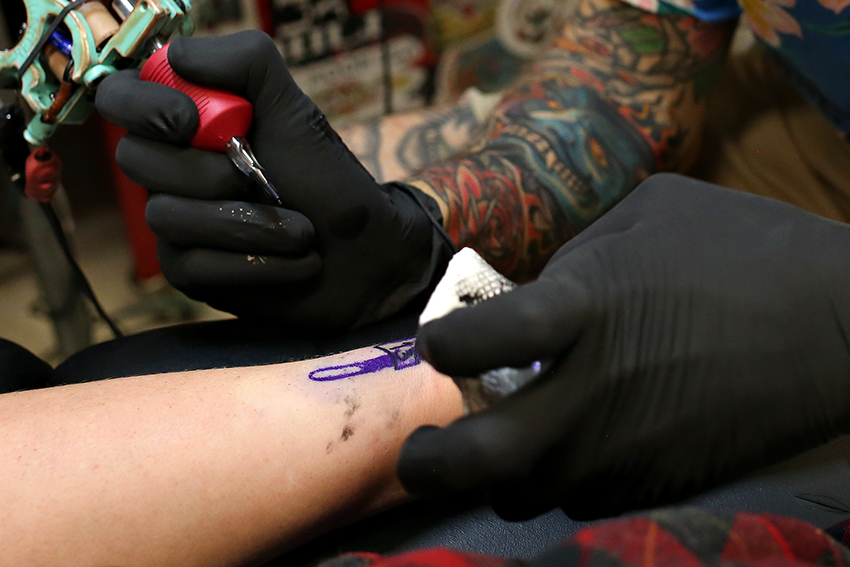 Dog sitter Lisa Cahalan is no stranger to tattoos — she already has four. But last Friday, the 26-year-old decided to get her first in honor of the unlucky holiday. As a fan of the horror genre, she chose a more traditional tattoo of an axe.

“I’ve always wanted to get it (Friday the 13th tattoo), because it’s like a tradition if you live here,” Cahalan said.

Cahalan said she sees tattoos as accessories that accentuate a woman’s true beauty and imagination. She said one of her clients told her the tattoo was a bad idea, but she responded by arguing that tattoos are good expression of one’s personality.

“I think it’s a way to emphasize how pretty a girl is, because that’s showing her creative side and what she likes,” Cahalan said.”It’s almost emphasis on the beautiful part of a woman versus degrading  it.” 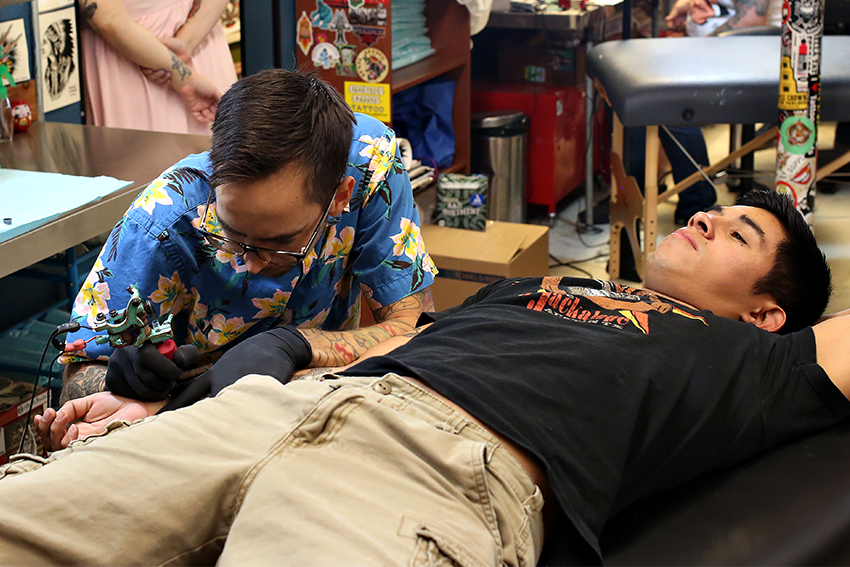 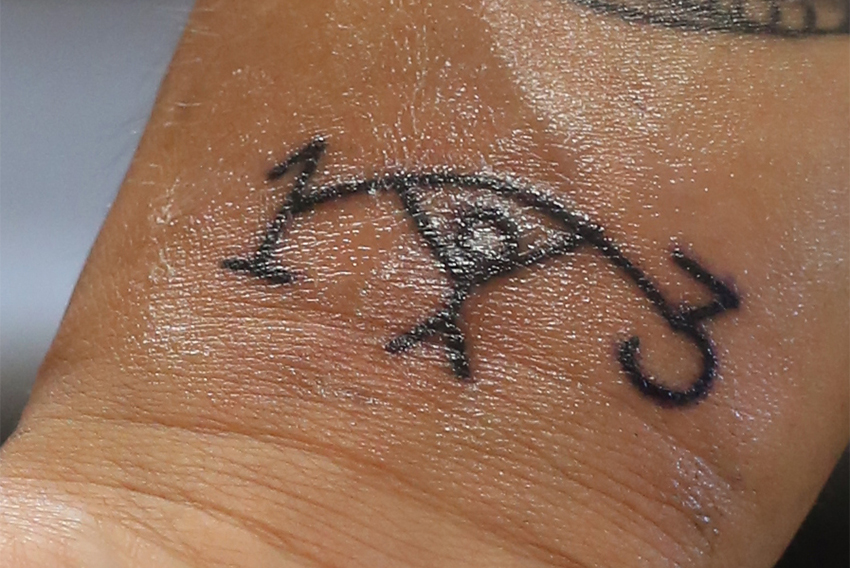 Austin native Jo Alva wants to one day be a tatted-up grandpa.

“I plan to keep getting tattoos until I’m old,” Alva said. “I want to be covered up.”

Today the 25-year-old bartender is one step closer to his goal by getting a stick figure power lifting the number 13. Alva said he is passionate about fitness, and knew he wanted the tattoo the moment he saw it.

Alva said anyone who questions his tattoo choice or looks down on them in general has no real reason to.

“It ain’t gonna hurt nobody,” he said. 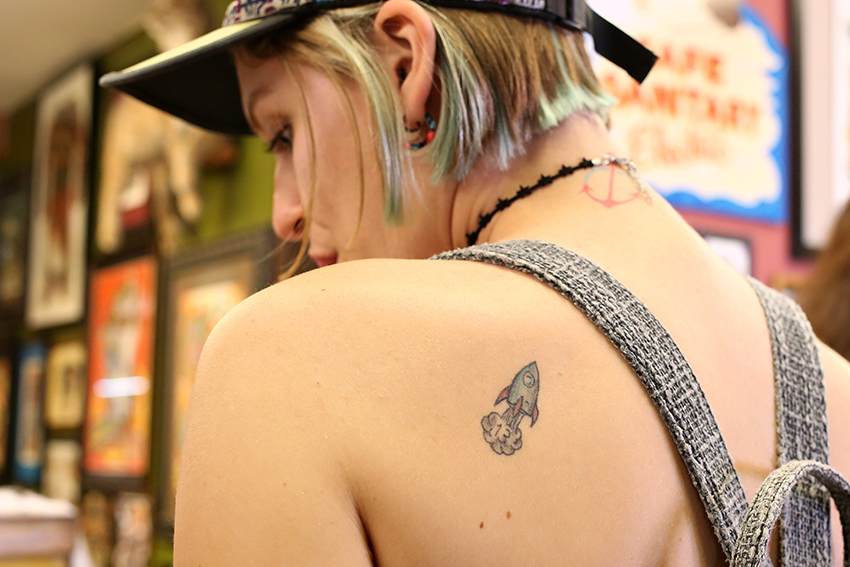 Her tattoos have been inspired by her personal life and the music she listens to. Dawson said the rocket and alien ships on her back are going to be in thematic alignment with her new tattoo of Space Dandy, a character from one of her favorite anime shows, she plans to get.

The two that currently adorn her arms both take inspiration from her taste in music. Dawson said one was inspired by her love for singer Melanie Martinez, and another, a crystal ball, finds its meaning in a line from one of Stevie Nicks’ songs.

“She has a line in one of her Fleetwood Mac songs about her crystal visions, and how she keeps her visions to herself,” Dawson said. “I thought that was a pretty cool one.”