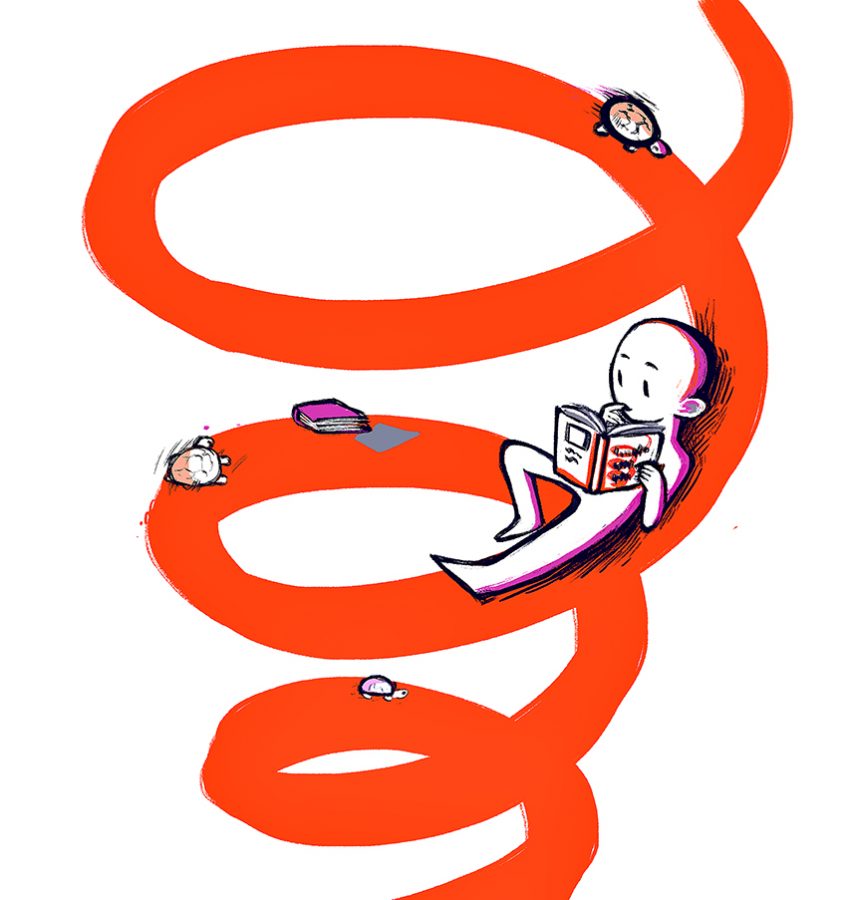 After sending audiences through a whirlwind of emotions with his 2011 romantic tragedy “The Fault In Our Stars,” John Green has returned with his typical poetic descriptions and sarcastic tones in the emotional drama “Turtles All The Way Down.”

In his newest teen novel, Green breaks down the stigma surrounding discussions of mental health and obsessive-compulsive disorder through his main character, Aza Holmes.

Throughout the story, Holmes is seen chasing a billionaire fugitive, who happens to be her neighbor and the father of her childhood friend, in exchange for a $100,000 reward. As she chases the truth and the money with best friend and Star Wars fan fiction author Daisy Ramirez, she finds herself rekindling past feelings for long-lost friend, Davis Pickett. Meanwhile, Pickett, a rich teenage poet, is dealing with mixed emotions about his father’s disappearance, his newfound guardianship over his younger brother and a soon-to-be-rich lizard.

The story, however, takes a backseat in Green’s book, as he primarily focuses on Holmes’ inner struggle with acute anxiety and severe OCD fixation on microbial diseases.

With thought-provoking, occasionally lengthy narratives of Aza’s “invasives,” or recurring anxious thoughts, Green has managed to put into words the unheard struggles of OCD and the rapidly tightening spirals felt by victims of anxiety attacks. The influence of Green’s personal mental health battle on his character’s fight with this illness creates a clear, accurate and personal account of the experience. This makes the read very emotionally difficult and forms a real picture of mental health matters to which readers can relate.

Throughout “Turtles,” Green tells the story through some of his familiar teen characters: a young, considerably sarcastic female, and a best friend that is easy to love and hate simultaneously. Meanwhile, an inner battle to find one’s self and place that is more philosophical than that found in most young adult novels takes place, presented through deep but easy to understand poetic metaphors. Additionally, it features Green’s trademark romantic themes, lyrical and alluding to the stars, while also acting as Green’s first crime fiction. Although both themes are thoroughly developed, the overlying and obvious main idea is Aza’s daily battle with her intrusive thoughts.

Meanwhile, beyond the darker thematics and tear-provoking anxiety attacks, the story remains emotionally manageable as Green take audiences on a journey through the busy streets of Indianapolis, coupon-paid dinners at Applebee’s and a constant search through the confusing clues left behind by the missing billionaire.

Green also provides continuous comedic relief with Daisy, Aza’s partner-in-crime, who spends her days writing Rey and Chewbacca fan fiction while pushing Aza to the limits of her comfort zone. Green keeps readers sighing through the chapters with the deeply poetic quotes and comments from Davis, the humble and understanding love interest.

“Turtles All the Way Down” is Green’s conquering of the stigmatized mental health genre that might have been considered too personal in more conservative days, but is now both comforting and necessary. It not only shows readers that they are not alone, but also brings with it a new age of acceptance.