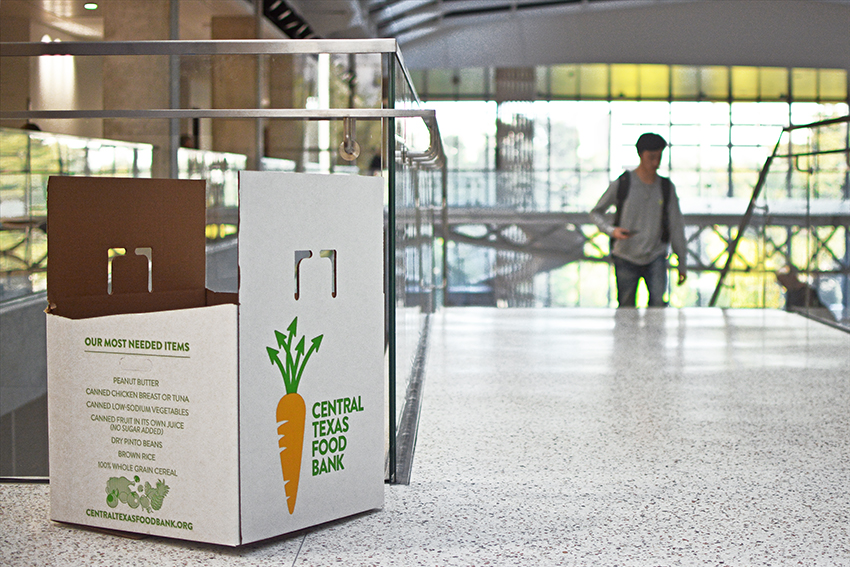 The Student Engineering Council, or SEC, coordinates the annual canned food drive, which began earlier this month and will end on Oct. 31. In 2016, the collection drive raised 4,553 cans, which equates to 3,638 lbs of food — enough for around 3,000 individual meals.

“This year is especially important since Hurricane Harvey happened in Houston, and a lot of food donations are going to the Houston area food bank,” chemical engineering senior Peng said. “Central Food Bank is actually kind of short this year, so we’re trying to make an even bigger push to collect as many cans as possible going into the holiday season for these families that depend on this food bank.”

“We did do a lot of disaster relief when working with Houston food banks to make sure they got the food they needed,” Pena said. “We saw an increase in who we served because of Hurricane Harvey and had some very targeted efforts. The hurricane utilized a lot of our resources, and it was so unexpected.”

“It is more important now than ever, with the impact Harvey has had on Texas residents,” Communication Council President Casey Brennan said.

Competition is an important aspect of the drive, Peng said. On Halloween, all nine councils will come together for an official weigh-in of total cans collected. The college that has amassed the most cans receives a trophy.

“It’s a real competition,” Peng said. “We try to make it as real as possible and kind of have that pride factor to go with your individual school.”

The drive has been a staple service project for a while, Peng said.

“The Student Engineering Council’s been doing it for years and years,” Peng said. “This is one of the ways we can reach out beyond Cockrell, beyond UT, to Austin and better lives there.”