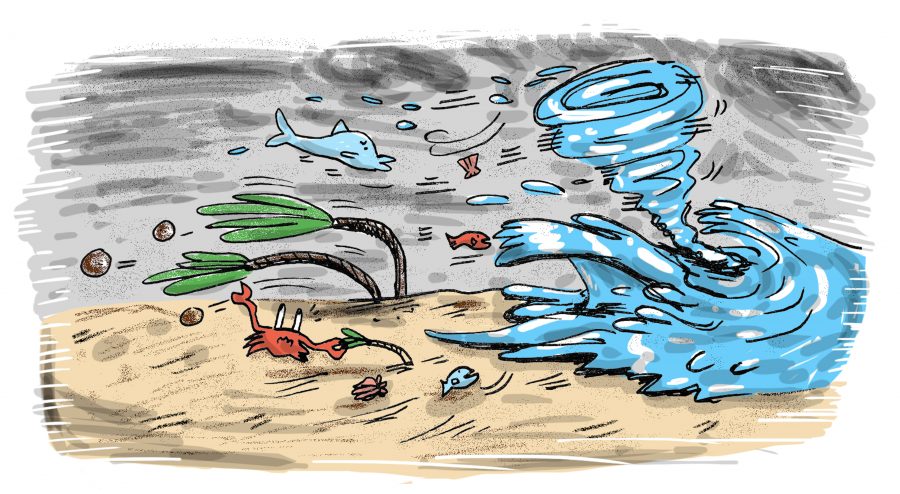 After Hurricane Harvey hit the Gulf coast of Texas in August, researchers from the UT Institute for Geophysics studied what impact the hurricane had on the coast itself.

The research focused on Harvey’s effect on the sedimentary addition and removal in the area and the effect on sedimentary constructs and the barrier islands.

The team’s main concern is that the storm may have caused a net loss of sand in the barrier reef island system, Goff said. If the sand is not replaced either naturally or artificially, the coast could degrade and would be increasingly vulnerable to rising sea levels.

This concern, coupled with predictions about future storms’ increased frequencies and intensities, is why assessing the seafloor is important, Goff said.

The team compared their new post-Harvey data with data taken in 2009 and 2012 by the Marine Geology & Geophysics undergraduate field camp course. They decided to go back to the area because satellite imagery provided by Google Earth following the hurricane showed drastic physical changes worth studying, Goff said.

In the Lydia Ann Channel, Aransas Pass and the Corpus Christi area, satellite imagery showed that strong air flowed outward from the storm system in an outflow event, possibly associated with wind-driven bay water movement towards the sea. The researchers also examined evidence of a surge high enough to pass over the top of the Lydia Ann Channel, which caused water and debris to float over the southern region of San Jose Island.

“Collectively, then, these observations provided strong (evidence) that the Lydia Ann Channel and Aransas Pass were critical pathways in the transport of water, and likely sediment, from the bays to the ocean,” Goff said.

Collecting data was far from simple in an area hit by a major storm, Goff said.

“The marina where we launched and moored our boat was hit particularly hard,” he said. “Many boats were sunk at their moorings or significantly damaged, as were most of the docks. We were particularly struck by the damage to (the UT Marine Science Institute’s) instrument pier, which survived the storm only to be destroyed by a drilling ship that had gotten loose from its moorings and ran into it.”

Another device collected sediment samples. The team used this device to look at grain size to determine the types of sediment that were transported through the waterways.

The team found that the hurricane caused significant erosion along the Lydia Ann Channel and Aransas Pass edges. The deepest parts of the channels saw large accumulations of sand, showing the large transportation of sand through the waterways during the outflow event. The sand probably settled when currents were low at the end of the outflow event, Goff said. From this, the team hypothesized that large quantities of sand were transported through the pass out to the sea and beyond the jetties.

“Findings can help or even change engineering practices for maintenance of waterways and infrastructure,” researcher Daniel Duncan said. “Just our short presence there can provide assurance that UT is there to help.”