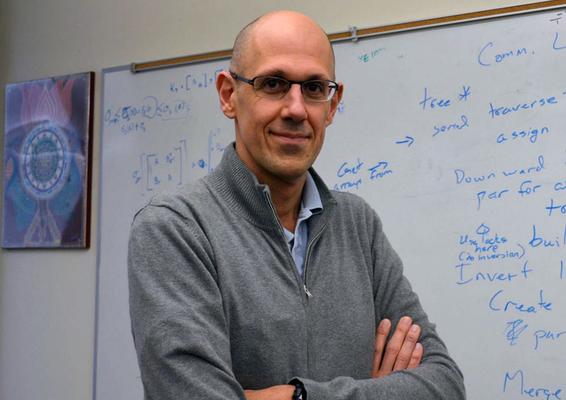 Courtesy of The University of Texas Institute for Computational Engineering

In an effort to transform brain surgery, engineering professor George Biros and his team will begin clinical testing early next year on their algorithm designed for in-depth analysis of tumors.

Currently, radiologists are constrained by time and lack of resources in their tumor analysis. Biro’s algorithm uses machine learning to analyze tumors in brain scans, which allows for more in-depth characterization of tumors compared to the traditional manual method.

Biros said this specialized characterization of the tumor would allow for a higher confidence in treatment and surgery.

“No one has time to look through all of this information manually,” Biros said. “Radiologists know where to look (on the scans) and they have experience, but we are trying to assist them. We’re nowhere close to actually
replacing physicians.”

For the last 10 years, Biros has partnered with Christos Davatzikos, radiology and engineering professor at the University of Pennsylvania, on the overall tumor segmentation project that began during Davatzikos’ doctoral studies.

“We want more sophisticated and complex measures such as the texture, shape, properties that relate to infiltration, and multimodal characteristics that tell us if there is a mutation,” Davatzikos said. “We want to have an atlas of the normal human brain as
a guide.”

Students who worked on different machine learning techniques for the project recently competed in the online Multimodal Brain Tumor Segmentation Challenge in Quebec City, Canada. The algorithm system scored in the top 25 percent of competitors.

“With (brain tumor analysis) you have to be 97 or 98 percent sure because it’s something so critical,” said Muneeza Azmat, computational science, engineering and mathematics graduate student. “When you’re identifying a tumor, you need to be pretty damn sure about it.”

The hands-on experience for the graduate students allowed them to be a part of engineering with real world applications, Azmat said.

“I’ve always wanted to do something that was not just pure mathematical or pure theoretical,” Azmat said. “If you do good work, it’s going to change people’s lives and make them better, which is a big motivating factor in whatever research I do.”

Davatzikos is working on collecting a sample of patients for the upcoming trial, but in the meantime Biros continues working toward a better algorithm and adding more characteristics to be analyzed.

“There are new versions of the software and new algorithms,” Biros said. “We’re always trying to improve our work. I’ll probably work on this until I die.”