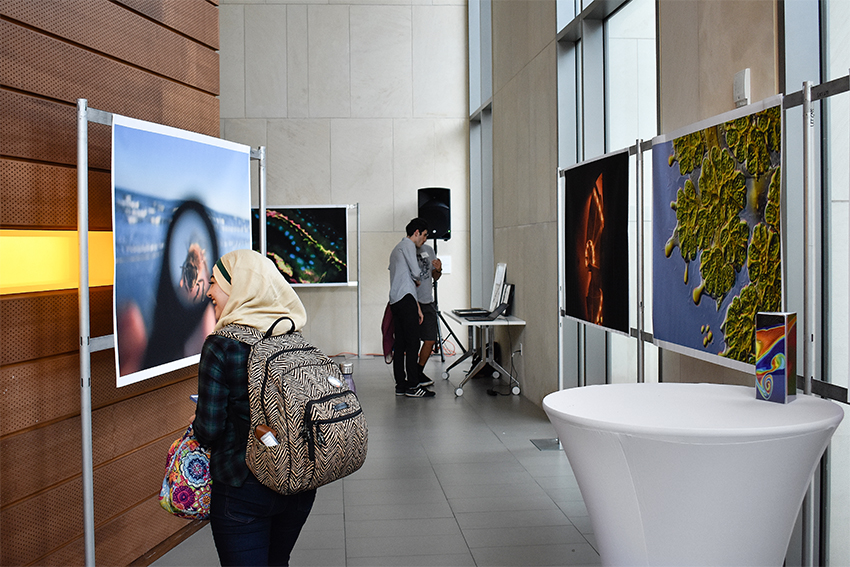 Natural Science Council and the College of Natural Sciences celebrated the artistic side of science in fields from astronomy to biology as they unveiled the winners of the 2017 Visualizing Science contest at the Art in Science event on Thursday afternoon.

“There’s so much art, whether it be genetics, or even just nature and the botany side of science. We take it for granted sometimes,” said Ashley Kim, a biology junior and academic affairs chair of Natural Sciences Council.

Swetak Pradhan, a neurobiology senior and the administrative director of Natural Science Council, said the event is an avenue for science students to display their personalities while also showcasing their scientific work.

“The College of Natural Sciences is the biggest college in the University so it’s really easy for people to lose a sense of individualism … it’s easier to generalize everyone as this sort of scientific mind,” Pradham said. “This event allows students to display their individualism through their artwork.”

The winners of the 2017 Visualizing Science competition were announced at the event, which took submissions from students, staff and faculty from the College of Natural Sciences. The submissions were put to a vote on Facebook, and then a panel of the CNS communications staff judged the social media winners, Pradhan said.

The winner of the Facebook Favorite award is Alec Blair, an environmental science and Plan II journalism sophomore who used his passion for photography while on a class field trip to capture a picture of a bee on his friend’s hand.

A panel awarded the rest of the awards based on the beauty and scientific merit of the submission. The three honorable mention winners are Arun Debray, a third year mathematics Ph.D. student; Patrick Rall, a physics graduate student; and Luisa Gil Fandino, a textiles and apparel lecturer.

Specifically, Debray’s piece is a colorful rendition of a Newton’s fractal, which is a pattern that repeats to infinitely small scales, in this case resulting from Newton’s method.

“Newton’s method is used in calculus to find where a function is zero,” Debray said. “(It’s) numerically unstable, which is bad for finding the root of a function but good for creating pretty pictures.”

Lukas Gradl, the third place winner and a master’s physics student, simulated a process known as diffraction limited aggregation in which two chemical solutions react and the resulting particles stick together to form “trees” in a fractal pattern known as a Brownian tree. He was motivated to submit his piece after seeing past winners.

“I was working on this as a hobby which came from a project I once did in class, so I ran a new simulation and submitted it,” Gradl said.

The second place winner is Travis LaDuc, a curator of amphibians and reptiles in the Department of Integrative Biology. His submission of a reconstruction of bony skin plates on a Komodo dragon’s skull is featured on the Facebook banner for the event.

The first prize went to Benny Tsang, a sixth year Ph.D. student in the astronomy department, for his image of a supercomputer simulation of a cluster of stars.

“I was inspired because astronomy is very cool,” Tsang said. “What you’re seeing (in the image) is the distribution of gas that are forming stars. You’re basically seeing star formation in action.”