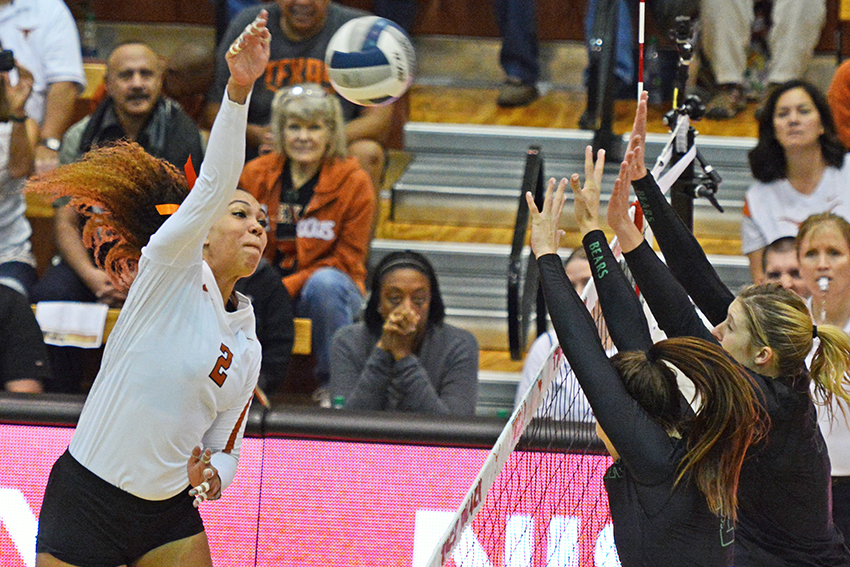 The Red River won’t be crimson this year, at least on the volleyball court. The No. 3 Longhorns (16–2, 8–0 Big 12) came from behind on Sunday afternoon to take down Oklahoma in Norman, improving its win streak to 10 games.

The two teams started off evenly, going point-for-point for the majority of the opening set. After Texas took a 23-22 lead, the Sooners used a 4-1 run to close out the first frame in their favor.

“We started off a little rocky at the beginning,” senior outside hitter Ebony Nwanebu said. “It took us a while to get back into the groove.”

Following a rare loss in the first set, Texas quickly turned it around, claiming the next two sets 25-13 and 25-18, respectively.

A strong defensive effort also helped the Longhorns turn defense into offense. The Longhorns had 16 blocks to the Sooners’ six, disrupting Oklahoma’s offensive flow at the net.

“Our defense did really well after the first game,” Nwanebu said. “That set our setter Ashley (Shook) up to dish out balls to her pins in the middle, and everyone else did their job.”

The final frame was contested by both teams, with Oklahoma escaping three match points before eventually folding at the hands of a Chiaka Ogbogu kill, sealing the 25-22 win in the fourth set.

“We knew that we needed to bring a little more energy,” Nwanebu said. “(Head coach) Jerritt (Elliott) talked to us about coming out better, and that’s what we have to look forward to in the upcoming games.”

Texas’ win in Norman wraps up a stretch in which four of the Longhorns’ five games have been on the road. As the team returns home for an extended break, they can finally take a breather.

“We’re gonna get two days off to recover mentally and physically,” Nwanebu said. “Then we’re going to hit the gym again.”

On top of being on the road for an extended period of time, the Longhorns have played a grueling schedule as of late, including a slate of three games in one week.

Texas will take a five-day break from action and return home to Gregory Gym to take on West Virginia on Saturday, Oct. 28. First serve is set for 7 p.m.