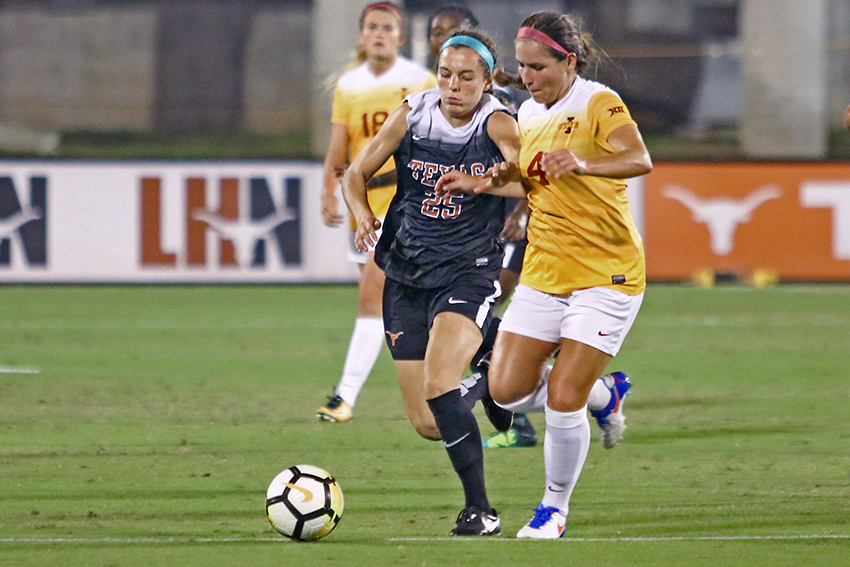 Overtime stayed kind to the Longhorns (13–1–2, 5–1–2 Big 12), as Friday night’s 1-0 victory over Baylor marked their fifth win in seven post-regulation games this season.

Things didn’t start off sharp for Texas, as Baylor created some early chances at a score. But the Texas defense remained stout, aided by the stellar play of sophomore keeper Nicole Curry. It wasn’t the prettiest victory of the Longhorns’ season, but head coach Angela Kelly will take one in the win column any way Texas can.

“We certainly didn’t have our best night of soccer,” Kelly said. “To figure out a way to pull that one out, as young as we are … we figure out ways to win.”

“I saw Mikayla (Flores) get the ball out wide and I knew I had to get myself in, and I saw Cyera (Hintzen) going front post,” Glenn said.  “I know Mikayla always crosses it back post, so I knew I just had to be there and get it on frame.”

The win over Baylor marked the second consecutive for the Longhorns. And despite a few blips in the Longhorns’ record near the half of the 2017 season, Kelly noted the Longhorns’ winning ways forming an attitude for her young squad.

“Winning’s a habit,” Kelly said. “It’s really, really important for our squad, all the members to understand what it takes to win. Any points that you can gather up on the road are tremendous.”

Glenn echoed Kelly’s sentiments following her game-winning goal. She discussed the complete nature of the Longhorn roster, and the cohesion of the group heading into the Big 12 Championships.

“Everyone fights and competes well, and we all just want to win,” Glenn said. “It’s a team effort for sure.”

Texas will have one final regular season contest, facing off against Oklahoma State on Friday evening. A win for the Longhorns at Mike A. Myers stadium would guarantee a top-two seed in the Big 12 Championship, which begins on Nov. 1.