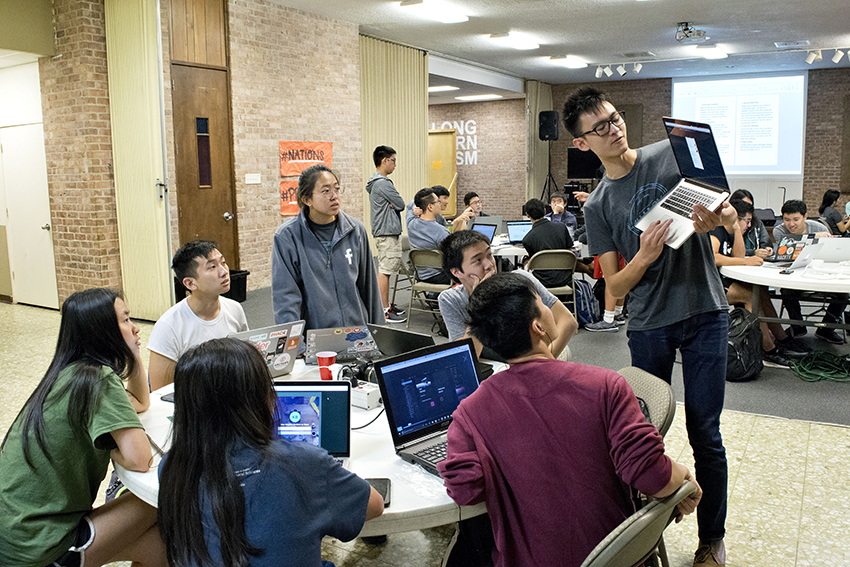 Teams in over 40 cities around the globe, including Austin, participated in a weekend-long hackathon from Friday to Sunday.

UT students formed Austin’s chapter of the movement and worked from 8 a.m. to midnight on Saturday, combining their interest in technology and faith. The event, Indigitous #Hack, is a worldwide effort to connect people to the Christian faith using digital strategies. The participants used their computer skills to create apps, ideas and software that will solve problems for modern missionaries, churches and believers.

At a hackathon, the end result is usually a mashup of different kinds of programs, codes or software said Eric Lee, an organizer and mentor at the event. Lee said the people that made up the event were from many different backgrounds.

“With a hackathon project, you mash it all together, but it’s also the people composition,” computer science junior Lee said. “You have all of these people who know different things.”

Challenges included creating a church app that would allow for prayer requests, sharing stories and organizing events to programming a chat bot that could communicate happy thoughts, bible verses and worship lyrics.

Management information systems senior Omar Olivarez and his team worked on developing an app that would create a newsfeed where people could count and share their blessings with other people. Olivarez said this hackathon was different than others he’s attended.

“In general, when we build these tools at hackathons, we’re creating something that’s useful to people,” Olivarez said. “Nowadays, a lot of the cool tech that’s out there is geared toward specific niche markets. It’s cool that we’re not ignoring the faith.”

The participating cities spanned from Buenos Aires and Chicago to London and Rio de Janeiro.

Bren Briggs, global director of challenges for Indigitous #Hack, joined the Austin team for the event. Briggs said the name of the organization, Indigitous, is a combination of the word “indigenous” and “digital.” Briggs said people groups are not only geographical anymore, because some people identify themselves best through their online communities.

Michelle Gu, planning lead for Austin’s chapter of Indigitous #Hack, said the goal of the event was to use all the different skill sets for good.

“The mission is to be able to serve God using our career and tech (skills),” computer science junior Gu. “If we can see our peers and students to be able to have fun and build something, but also experience where God plays a role into that.”