Buechele back in the mix after Ehlinger injury 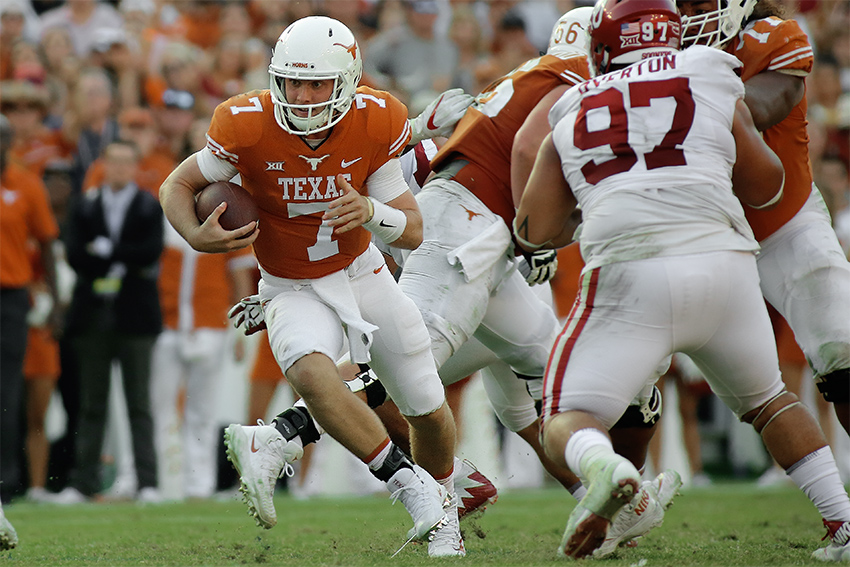 Just like that, the Longhorns’ quarterback situation is back in an uncertain state.

On Sunday night, Texas announced freshman quarterback Sam Ehlinger suffered a head injury in the Oklahoma State game Saturday. Ehlinger was forced to sit out practice on Sunday. Head coach Tom Herman said in his Monday press conference that Ehlinger entered concussion protocol and is being evaluated on a day-to-day basis.

Former starting quarterback Shane Buechele was back in the forefront of the conversation during Herman’s weekly press conference on Monday. With Ehlinger’s status in question, Buechele now has a chance of starting against Baylor in Waco on Saturday.

For Buechele, the 2017 season has not gone according to plan. The sophomore has battled injuries and had to deal with being uprooted as the starting quarterback due to Ehlinger’s emergence.

In his three starts this season, Buechele has thrown for 557 yards, three touchdowns and two interceptions, while completing 68.8 percent of his passes. Buechele last started against Iowa State on Sept. 28, leading the Longhorns to a 17–7 victory. He made a brief appearance late in the Oklahoma game on Oct. 14.

Ehlinger’s head hit the ground hard after being tackled late in the fourth quarter against the Sooners, and he left the game briefly. He was evaluated on the sideline while Buechele filled in with under six minutes to play at the Cotton Bowl. But Ehlinger returned and finished the game.

After nursing a sprained ankle following the Iowa State game, Buechele is now back to form per Herman.

“Shane is as good as probably he’s gonna be all season,” Herman said. “He’s still wearing a brace on the ankle to protect it more than anything right now, but it feels good. Again, last week, I saw a lot more zip on his throws, because it is his right ankle. He hadn’t been pushing off of it very well in weeks prior to that. But last week I saw a noticeable improvement. When he runs, it’s not a gallop like it was.”

Herman said on Monday that Texas’ medical staff “noticed something off” with Ehlinger following postgame interviews after Saturday’s home loss to Oklahoma State.

Ehlinger was then evaluated and sent home. Twenty-four hours later, Ehlinger still “showed some symptoms,” according to Herman.

“I hope by now we all know the coach’s role in that is very, very limited, if any,” Herman said on Monday. “My understanding is (Ehlinger) was cleared — symptom-free the entire week after the Oklahoma game. Obviously, he was cleared enough to go back into the game, and then at some point during the game against Oklahoma State, something happened.”