For blind student, clear vision is in sight 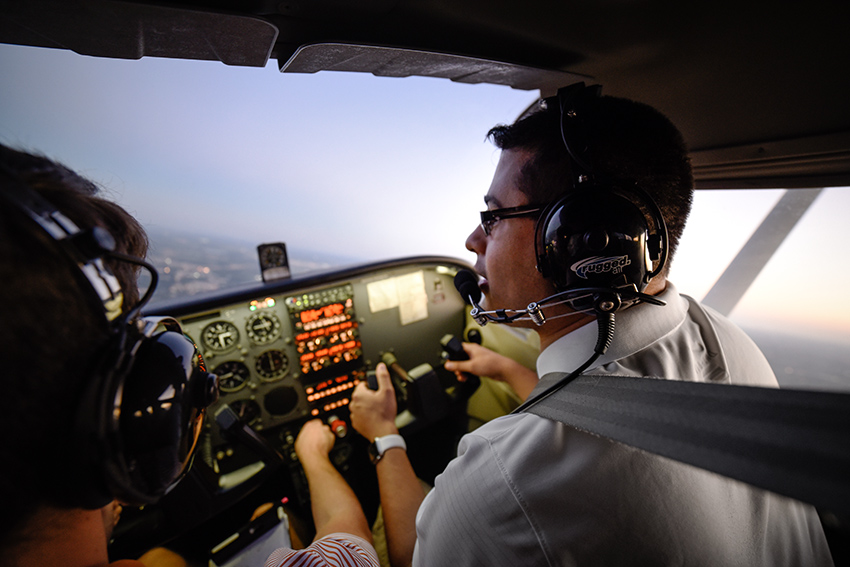 In 23 years, Nick Flores has never seen his mother’s face. He can make out the general shape but has never looked into her eyes or seen her smile.

Nick’s has had this condition since birth. Born 13 and a half weeks early, his mother said his doctors did not believe he would survive. If he did, they said it would be with severe disabilities.

Nick was born weighing only two pounds seven ounces and immediately went to the hospital’s neonatal intensive care unit. After more than four months there, Nick’s parents finally brought him home on Thanksgiving.

“He is my miracle,” Nick’s mother Bonnie Flores said. “He truly is.”

But his high degree of prematurity left him severely handicapped. Nick suffered from a brain hemorrhage, a traumatic brain injury resulting from blood loss that damaged his optic nerve.

To compensate, Nick almost always uses his right eye to focus. Whenever he reads or makes eye contact while talking, he typically turns his right eye toward the subject, creating the appearance that he is not actually focusing on the speaker.

Nick often explains his eye damage using an analogy of a corded lamp. Like a lamp needs electricity to light up, a person’s optic nerve needs to be fully “plugged in” to be able to communicate properly with their brain. Nick’s optic nerve is only partially attached, which prevents his retinas from being able to properly transfer what they are seeing to his brain.

When reading, big letters help. On his phone, Nick uses the largest font available yet still has to hold his phone about six inches away from his face to read off of it. In print, the smallest font he can read without difficulty is 24-point.

Even with glasses, Nick said it is still extremely difficult to see and read. Some days, he feels like they help him focus. Others, he said, they feel like useless accessory.

Soon however, he may be able to do what both he and his mother never believed possible, see the world clearly.

Several weeks ago, Bonnie saw an ad on Facebook for a new type of glasses called eSight. She had never heard of them before, so she forwarded a link about them along to Nick. Eventually, Nick called the manufacturer, eSight Eyewear, about making an appointment to test them out.

According to eSight Eyewear’s website, the glasses use a high definition camera that is then modified using algorithms to match the user’s vision as closely as possible. Two screens then project what the camera sees onto the user’s eyes with as much range as possible. This diminishes the effect of lost peripheral vision from wearing the glasses, which can lead to nausea and issues with balance.

Leading up to his appointment, Nick said he remained skeptical. The glasses had only been out for a few years, and eSight’s website warned that they do not work for everyone.

“I didn’t think it was a legitimate thing,” Nick said. “It seemed too good to be true.”

But there was a roadblock. The appointment was over 200 miles away in Fort Worth, and Nick did not have a way to get there.

That is when Nick’s friend Jack Bane, a pre-med biology freshman, offered to drive him to Fort Worth. Despite having only known each other for a few weeks, Bane said he did not hesitate to take Nick to Fort Worth.

“(eSight) could be a completely life changing thing for him, if it actually did work,” Bane said.

When they arrived in Fort Worth at a hotel where dozens had made appointments to test out the glasses, Bane said he was unbelievably excited for Nick.

Putting the glasses on, Nick said he turned to Bane and did something he never thought possible, looked him in the eyes. The demo was short — only 15 minutes long — but Nick said it felt like a lifetime of the eyesight he never had.

“It was really relieving,” Nick said. “For the first time, I could actually see Jack. I could make eye contact.”

Bane said he could tell his friend was in shock. For a while, Nick just sat there and looked at him.

“It’s like not being able to walk your whole life, and all of a sudden you get to walk and to see somebody do that for the first time is a pretty amazing thing to witness,” Bane said.

eSight corrected Nick’s right eye from 20-80 to 20-40 and his left eye from 20-200 to 20-80. This meant Nick could finally see out of his left eye, something he thought unimaginable just two months before.

Bonnie said she could not believe how well the glasses worked for Nick, and she finally had hope of Nick being able to live a normal life.

“With eSight that day, he just felt normal,” Bonnie said. “He felt like he didn’t have this problem.”

Last week, Nick still faced one major issue. The price tag on the glasses is far beyond the reach of what his family can pay. At over $10,000, Bonnie said there is no way they could afford eSight on their own.

“It’s painful for me to want to be able to help my son, and financially I can’t,” Bonnie said as she fought back tears.

Recognizing the high price point, Nick said eSight does not expect most of their customers to be able to afford the glasses on their own. Instead, the company helps clients market and fundraise money.

Wednesday night, Nick got a call from his representative at eSight and the president of the company with some news. Following a fundraiser in the company held in Toronto, they told him he had been selected to receive full funding for the glasses.

The glasses will arrive in a few weeks, just before Nick, a student at Austin Community College, takes his finals. After the semester ends, he will head home for Christmas to see his family for the first time.

“I’m excited to see my mom for the first time,” Nick said. “That’s something I’ve wanted to see, my mom.”

Currently, Nick lives in a house with another visually impaired person, who he subleases from.

“She understands what it means to have low vision, to be visually impaired,” Bonnie Flores said. “He’s not alone.”

The brain injury that damaged Nick’s eyesight also caused him to develop cerebral palsy. The condition is a neurological disorder that primarily affects body movement and muscle coordination. Weeks after his birth, doctors told Bonnie that he would likely never walk.

However, Nick only developed a mild case of cerebral palsy, leading to difficulty with moving his right leg and writing. Nick has never needed a wheelchair, but Bonnie said he often gets tired easily after walking.

Along with his classes at ACC, Nick also works at the University Catholic Center part-time as the head audio technician and someday hopes to attend UT.

To get around, Nick either walks, uses CapMetro buses or asks for rides from friends because his visual impairment prevents him from getting a driver’s license.

But even with the glasses, Nick will still never be able to drive. The glasses rely on battery power, which makes it dangerous for him to be on the road should they ever die or malfunction, Nick said.

Nick has hope for another mode of transportation: flight. Ever since he was a child, Nick said he has always loved flying. In grade school, he volunteered at a former military base airport working with veterans to maintain and care for retired aircraft.

Before he found out about eSight, Nick said he thought he would never be able to get his pilot’s license. Nick said it will still be hard to get the license even with the glasses, but he is determined. Bane — who obtained his pilot’s license over a year ago — serves as his inspiration.

“When you have a friend who you find out is a pilot, it kind of opens up your world,” Nick said. “If he can do it, so can I. I might have to go a different route along the way, but there’s that possibility of getting my pilot’s license.”

If Nick can get a pilot’s license, Bonnie said it would give him newfound independence he cannot get any other way. Nick is still looking into the details of achieving this goal, but he hopes he will be able to get his pilot’s license, even if it has restrictions on when and how he can fly.

“I get a little nervous,” Bonnie said. “I’m not going to lie, but this is something that he’s always talked about.”

A few weeks ago, Nick went on his first flight with Bane. Taking off from Austin-Bergstrom International Airport in a Cessna 172, they flew over downtown, giving them a perfect view of Zilker Park where the first weekend of Austin City Limits was in full swing.

Nick said the flight boosted his confidence and determination to be able to fly someday. Bane even let him fly the plane for a few moments, he said.

“That something that I never thought I’d get to do, (and) I’d always dreamt of that as a kid,” Nick said. “I never thought that dream would be a reality.”