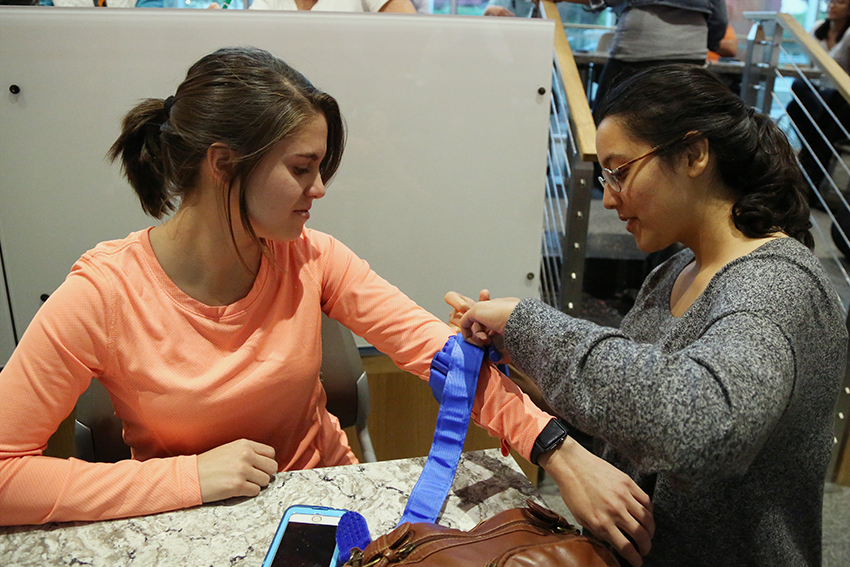 During a Tuesday training seminar hosted by Dell Medical School, students learned various techniques on how to control bleeding in life-threatening emergencies.

Stop the Bleed is a national awareness campaign to promote bystander intervention in life-threatening situations. In the wake of the Las Vegas shooting that killed at least 58 people on Oct. 1, Claire Zagorski, spokeswoman for the UT chapter of Stop the Bleed, stressed the importance of bystander knowledge in these situations.

“It’s tremendously unfortunate that we keep being shown (these situations) over and over again,” anthropology senior Zagorski said. “We need this class. We need people to know these things because they keep happening.”

The class introduced three methods of bleed control: direct pressure, wound packing and, the most reliable method, applying a tourniquet, which is a compression device used to stop severe bleeding.

“For a really long time, tourniquets were a last resort,” Zagorski said. “They were dangerous. We now know that is not true. They are very safe for at least two hours, which is a very long time to be wearing a tourniquet.”

Steve Steffensen, associate professor of medicine at Dell Medical School, said in emergency situations, individuals have to use their best judgment.

“If we had everybody trained on this, that number one cause of death in terms of trauma would markedly decrease because of bystanders intervening,” Steffensen said.

Even if there is no tourniquet or other medical supplies suitable for bleed control, Zagorski said someone can save a life from a serious injury by applying direct pressure to the wound.

“Almost all the bleeding we can handle in this situation can be dealt … with good direct pressure,” Zagorski said. “It’s not as ‘flashy’ as the other methods, but it works — even big arterial bleeds can be stopped with really good pressure.”

UT emergency preparedness coordinator Robin Richards said the University is working to install safety hubs in all buildings on campus, including medical supplies such as an AED, an emergency call box and bleeding control kits.

“There are going to be at least two (Stop the Bleed kits) in 160 buildings on campus,” Richards said. “Every police patrol car has a set of bleeding control kits as well.”

Zagorski said the protection against bloodborne pathogens is also vital.

“When you’re looking for things like, ‘How do I find gloves and protect myself?,’ there will be kits like that all over campus very soon,” Richards said.