Newcomers stand out at Orange-White scrimmage 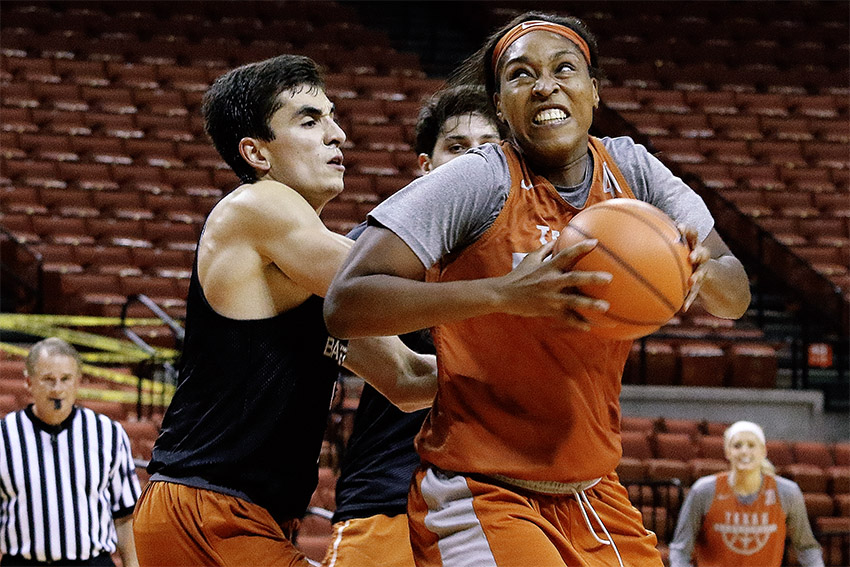 Last Saturday, head coach Karen Aston asked her players to give themselves a grade based on the team’s performance — the Longhorns had just finished a closed-door scrimmage against a scout team made up of male students. It was their first test of the season at home.

“We flunked it,” Aston said.

Texas received a second chance against the male scout team on Wednesday afternoon at the annual Orange and White scrimmage at the Frank Erwin Center, this time in front of a crowd of fans and media. Aston used the opportunity to experiment with different lineup combinations and give the team’s newcomers an opportunity to mesh with returning players.

The Longhorns’ three freshmen waited until the second quarter to enter the game, but the year’s No. 3 recruiting class made the most of their chances.

On one play, freshman guard Destiny Littleton brought the ball up the floor and drew a double team as she crossed the half-court line. Littleton found a crease in the trap and made a bounce pass to fellow freshman guard Chasity Patterson.

Patterson spun past her defender and found senior forward Audrey-Ann Caron-Goudreau open near the basket. Caron-Goudreau’s layup missed, but freshman forward Rellah Boothe tipped the ball back in for the score.

“I thought (the freshmen) actually gave us really good sparks today,” Aston said. “I had asked them a few days ago to get a little bit more serious about their approach, and I thought all three did that today.”

“I was really proud of them,” junior forward/center Jatarie White said. “As soon as they stepped on the floor, they brought it and brought the intensity.”

White transferred from South Carolina in 2016 and sat out all of last season. She started the game for Texas, marking her first appearance in Austin as a Longhorn.

On the team’s first play of the night, senior guard Ariel Atkins fed White on the right block. The post gave a ball fake to the left, then turned back the other way, finishing with a hook shot over her right shoulder.

In the fourth quarter, White sank a pair of free throws to give the orange team a one-point lead with 5.7 seconds left in the game. Following a timeout, a white team player pump-faked senior guard Brooke McCarty at the right elbow, leaving White as the sole defender to contest the last shot.

The player’s jumper over White beat the buzzer and went in, giving the male scout team a 90-89 victory. White led her team with 15 points and eight rebounds but was disappointed with the loss.

“I think our weaknesses were definitely on the defensive side,” White said. “We let them get to 90 … we shouldn’t let them get to that many points. But, we just have to stay focused on our movements and defense and helping each other out.”

Despite losing, Aston was still pleased with the effort her team showed.

“I didn’t see a whole lot of things that we can’t address and fix as we move forward,” Aston said. “I would probably say we jumped up a couple of grades this time.”

The Longhorns play a home exhibition against Oklahoma City University on Nov. 5 and will open the regular season on Nov. 12 at home against Stetson with a 1 p.m. tipoff.