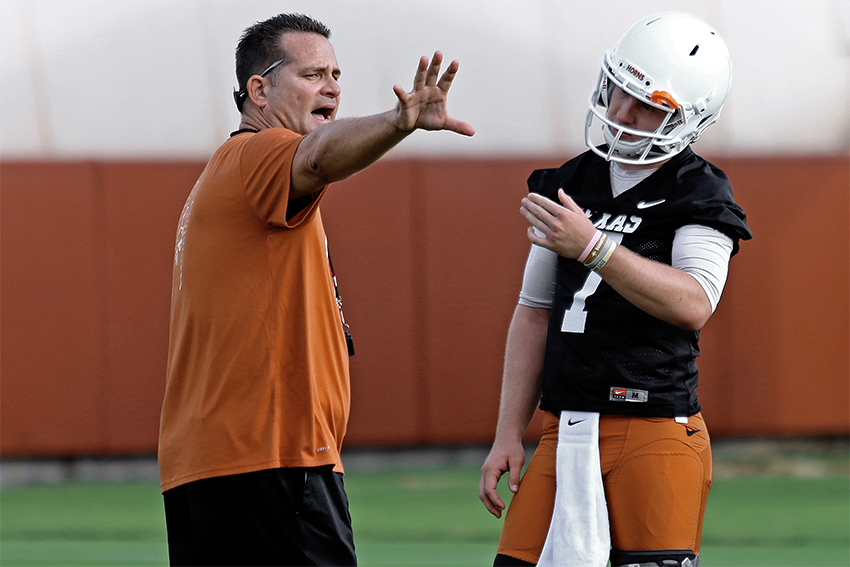 In the week after a game where Texas’ struggles on offense finally boiled over and came to the forefront of conversation, offensive coordinator Tim Beck was asked if he feels players are pressing.

But Beck also didn’t refrain from a self-assessment.

The struggles of the Texas offense have been no secret this season, and the numbers show it.

The Longhorns rank 49th in the country in total offense, averaging 433 yards per game. More importantly, Texas is near the very bottom in the country in red zone offense, ranking 112th. In 30 trips to the red zone this season, Texas has failed to score eight times.

But the running game in particular has been where Texas has staggered the most. The Longhorns are tied for 75th in rushing offense, averaging 151.4 yards per game on the ground. Texas is averaging a measly 3.67 yards per carry.

Following Texas’ 13-10 overtime loss to then-No. 10 Oklahoma State last Saturday, junior running back Chris Warren III, who has had nowhere near the breakout year that some anticipated coming into the season, offered his own blunt assessment as to why the Longhorns’ offense is struggling.

“Because we don’t have a running game,” Warren said. “I think that we’re too one-dimensional and that’s easy to predict, so that’s why we’re not helping the defense.”

Much of the struggles in the running game could be attributed to Texas’ makeshift offensive line, which has experienced numerous injuries this season, including the loss of both starting tackles in juniors Connor Williams and Elijah Rodriguez.

What’s more, Texas’ unsettled running game has largely been dependent on the legs of freshman quarterback Sam Ehlinger, who is currently second on the team in rushing behind Warren.

“I think it’s a combination of things,” Beck said. “We are trying to be committed to the run. We also want to take what the defense gives us at those times. … As a play-caller, you’re trying to find that rhythm. It got to a point (against Oklahoma State) where sometimes you’re not even looking to try to score, you’re just trying to get a first down.”

And much of the criticism for Texas’ struggles on offense this season has been directed solely toward Beck.

After the loss to the Cowboys, head coach Tom Herman was asked point-blank if he feels that Beck is doing enough on that side of the ball. Herman proceeded to ardently defend his play-caller and offensive staff.

“Tim’s doing fine. I hired Tim because he’s very, very capable of doing this job,” Herman said. “And he’s got a big task ahead of him. We do. We’ve got a big task ahead of us to right the ship on that side of the ball. And there’s no doubt in my mind that him and the offensive staff that’s in that room, along with myself, are the right guys to get that done.”

The Longhorns’ defenses the past two seasons were two of the worst in school history statistically. For much of last season, it was the offense who kept the Longhorns in games while the defense faltered.

This season, that narrative has flipped on its head. Texas’ defense, which is coming off a game where it held Oklahoma State’s top-ranked offense in the country to just 10 points in regulation, has experienced a revival this season.

But for the Longhorns to salvage this 3–4 season and make a bowl game, the offense will need to experience its own revival.

“We’re not losing faith,” Beck said. “We believe in what we’re doing.”