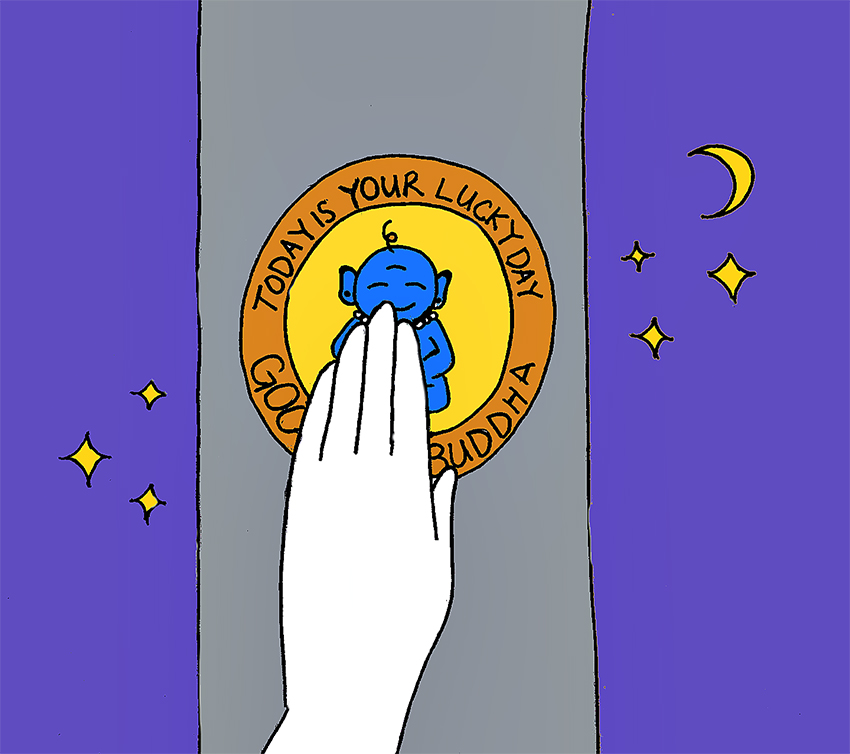 Beer cans and broken bottles seem more likely imagery for a walk through West Campus than depictions of Buddha, but the latter is exactly what’s posted on buildings and poles around Austin. The cartoon-style street art seems randomly placed, but the artist responsible is determined to bring luck to Austinites.

The artist, who has merged identities with his art by calling himself “Buddha,” began this project three years ago, and has since put up more than 5,000 stickers and wheat pastes around the city.

The message within Buddha’s art is inspired by his philosophy on luck itself.

“I think we expect luck to be this magical gift from the universe,” Buddha said. “But it’s really a combination of hard work, persistence, timing and a little bit of luck.”

Buddha said he hopes his art will give viewers reassurance that luck is on their side so they can have a “Lucky Day,” as it says on the stickers.

Buddha experimented for years with other mediums of art, including painting and graphic design. None of these fulfilled his need to create, which Buddha realized when he found his passion for street art.

“Once I started doing street art, everything clicked,” Buddha said. “I realized why nothing else stuck for me.”

After being inspired by another Austin street art design, “Happy Robot,” Buddha decided to test out his own designs with the public by producing a small number of stickers featuring his trademark logo. After answering over 500 requests for stickers, Buddha began putting his stickers up in public areas in order to reach more people.

“I started with the traditional Buddha, because it is something everyone knows,” Buddha said. “Everyone, not just Christians or Buddhists, gets some sort of feeling from seeing the image.”

Although his early work featured a religious figure, Buddha’s work has since become more secular. The artist has created alternate sticker designs replacing the Buddha with recognizable characters such as Peter Griffin and Homer Simpson.

Because Buddha maintains his anonymity, people are empowered to create a persona for him in their own mind as a response to the art.

“Sometimes I’ll wear a shirt with my design on it, and someone will say, ‘Nice shirt, Buddha is a really cool guy,’ and they have no idea it’s me,” Buddha said.

Undeclared freshman Paige Feldman, an avid fan of Buddha’s work, remembers her first encounter with the wheat pastes in Austin.

“I was walking and I saw a sticker on a metal box in the street,” Feldman said. “I have been trying to find more because when I saw it I think it put me in the mindset that I was lucky and could push myself to do well on a test that day.”

Feldman is not the only one who has taken an interest in spreading Buddha’s message. The artist has amassed over 6,000 followers on Instagram by posting photos of his street art around the world.

Buddha does most of the drawing and pasting of his art but is also helped by his family. His wife and two children are supportive of his art and do anything from cutting out stickers to joining him on tagging missions.

“I have explained to my kids that what I do is not technically legal,” Buddha said. “But I tell them that I am very safe and take precautions to give myself the best chance of staying out of trouble.”

Although some view his art form as disruptive, Buddha persists that those who are reluctant to appreciate his message will do so “when it is their time to see it.”

“I get a little bit anxious before I go out to put up my work,” Buddha said. “But once I get there, I am at home on the streets … it’s almost therapeutic for me.”