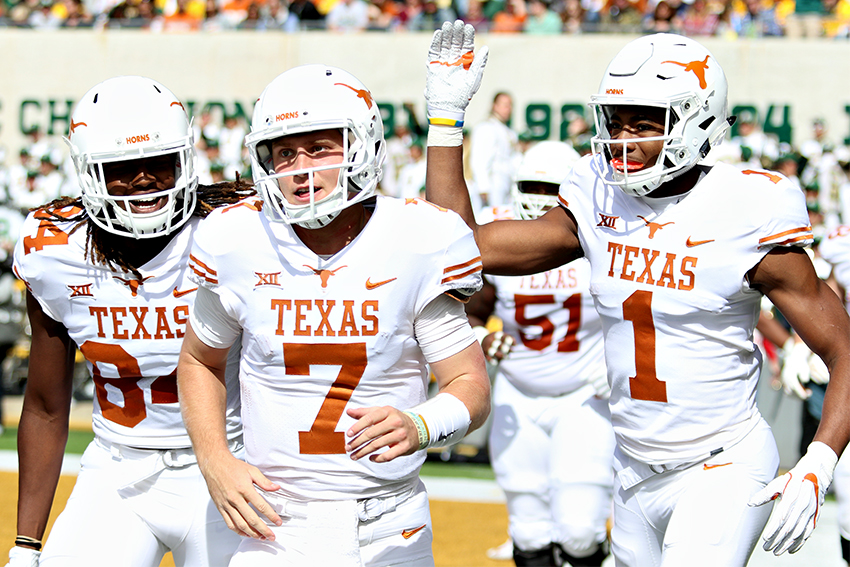 Shane Buechele has spent half of the 2017 season wearing a headset on the sideline. But one 38-7 victory on Saturday against Baylor and the sophomore quarterback has inserted himself back in the conversation.

And just like that, Texas is back at square one.

The Longhorns appeared to have their quarterback situation settled. Head coach Tom Herman said freshman quarterback Sam Ehlinger would be the starter for the rest of the season following the 29-24 loss in the Red River Rivalry.

Buechele spent three-straight weeks on the sideline, watching Ehlinger lead the same offense he once led in the season opener. But after Ehlinger failed to clear concussion protocol last week, Buechele got his opportunity to return to the field.

“It’s been tough, I’m not gonna lie,” Buechele said. “You just have to stay focused. I think that’s just the main thing … It was good to be back on the field and being able to go compete with my guys.”

Despite not starting since Sept. 28, Buechele didn’t miss a beat. The sophomore threw 27-for-34 for 256 yards, one touchdown and even rushed for a 28-yard touchdown en route to a 38-7 victory over Baylor in Saturday’s contest.

“I’m proud of him,” junior linebacker Malik Jefferson said. “He came in there with poise. I was excited to see him play his hardest for his brothers, run the ball really well and have some really good passes. Moving forward I hope he keeps that
same mindset.”

However, it wasn’t all smooth sailing for Buechele. The sophomore was wearing an ankle brace after spraining his ankle in the Iowa State game, and it appeared to affect his ability to hit the brakes. That was evident after Buechele struggled to slow down after his 28-yard touchdown, forcing him to run all the way up the tunnel of McLane Stadium. And his teammates saw it, too. “Oh, that was gross,” Jefferson said. “He couldn’t slow down … It was awesome, though.”

But Buechele’s return on Saturday has been a long time coming. Herman said he wasn’t sure when the team would need Buechele, but he knew the opportunity to lead the team would rise eventually.

“The first game that he was somewhat healthy — at least cleared, but didn’t start, which was USC — I reminded him early in that week that at some point your team is gonna need you,” Herman said. “And they’re gonna need you to be engaged throughout the course of however long it takes for you to get back in.”

Now, Texas finds itself in a similar position, having to pick a starter with Saturday quickly approaching. But Herman said this isn’t all bad.

“I think one of — probably the only — silver lining to having those guys banged up and both of them having played very well at times is that we don’t have to name a starting quarterback,” Herman said. “By Wednesday or Thursday we probably should know internally, but that’s for them to figure out.”

The Longhorn faithful will now play the guessing game until the Longhorns take the field in Fort Worth on Saturday. However, if whoever starts this week stays healthy, that might be the starter for the remainder of the season.

“I do think there is a rhythm,” Herman said. “To say that we’d like one to ride out the next four games, yeah, I think that’s pretty accurate. Now is that realistic? I don’t know. Recent history tells me it’s not, but I think that would be ideal.”