Q&A: Making Movies talks about the stories behind their music 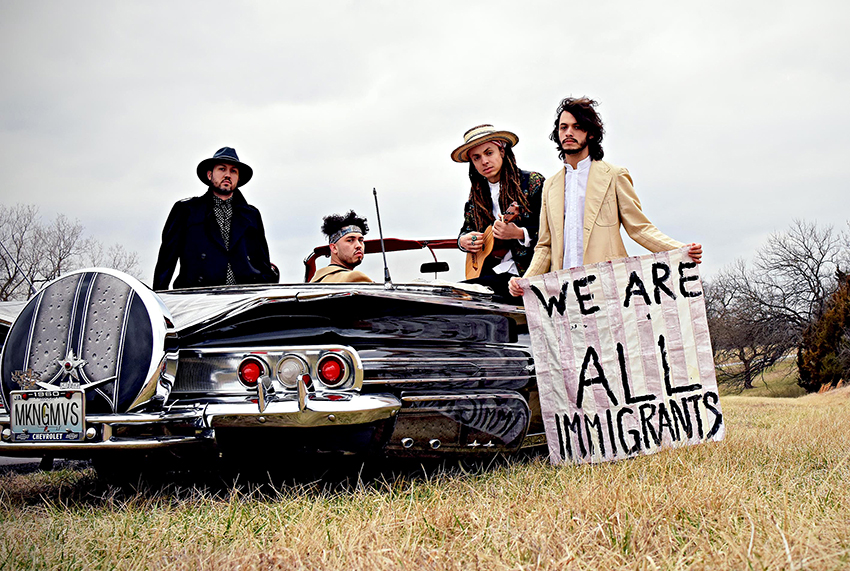 An unexpected combination of Afro-Latin rhythm and rock ’n’ roll, Making Movies is breaking through both the music and political worlds with their socially conscious songs. The Kansas City-born group relates to their audience, and immigrants in particular, through lyrics describing the band members’ own experiences as immigrants. Today, they are showing their support for DACA Dreamers by giving them free admission to their new tour with Los Lobos, including at their upcoming Austin show on Nov. 6. The Daily Texan spoke to Making Movies singer and guitarist Enrique Chi about the band’s music and its political undertones.

Daily Texan: Your music is bilingual. Can you tell us why you took that approach?

Enrique Chi: To me that was the most natural thing to do. I have been bilingual my whole life, since I was 6 years old … When songs present themselves to you, it seems they arrive sometimes, and they have their own agenda, and you have to figure out what that agenda is. Sometimes it arrives in Spanish, and sometimes it arrives in English. Sometimes the music shows up, and it takes me a minute to figure out what is the best language to write to the music. That can be kind of an experimental process, but most of the time, I know right off the gate because usually the song shows up with a musical idea and a couple lyrical ideas, and they all kind of arrive at once.

DT: Where do the stories in your music come from?

EC: Our new album, I Am Another You, is really about the stories of three people that are very close to us. One of them is one of my friends, another is a bass player and cousin and the other is a drummer and percussionist (and) cousin … When you are making art you try to figure out what is something that means something to you, and that maybe needs to exist in the world — like maybe there is a void for it. In a lot of ways, there is not a void for woman-broke-my-heart country songs, but for us as artists, you try to handle what is inspiring to you. Also, you do a service to the community when you are creating work, so we tried to think, “What is something unique to us, that only we could write about?” I thought (that) as a bilingual, bicultural person who is already an artist traveling, (it was important for me to write) about that feeling of meeting different people from all over the world.

DT: Who are the three people that the album is based on?

EC: It is three characters: Jose, Joshua and Jesus. They each go through their own turmoil. The time period when we were writing the album where all of our friends were kind of maturing, entering their mid-twenties, late twenties. One of the characters unfortunately got wrapped up in some illegal things and got in some serious trouble. My cousin in Venezuela, his experience was completely different based on political turmoil. It turned his whole life upside down, everything his family had worked for, and he had to emigrate out of Venezuela. My good friend who is going through a divorce married young. (He) had three kids and that feeling like the world is crashing down upon me. The circumstances were so different, but the feeling was so similar. That was kind of the point of the record, to remind everyone to have empathy for each other. Pain and suffering are relative. When you are really going through something heavy, and you feel like the world is crashing down upon you, that feeling is universal, even though your circumstances might be entirely different.

DT: Why do you choose to use music to make a political statement?

EC: The album wasn’t meant to be political; it was meant to be that feeling of “Look, I have friends of different races and cultural backgrounds (and) even though they are so different, (their experiences show) how similar the human spirit is.” When racism reared its ugly head, and you are saying something like everyone has shared goals and shared experiences, all of a sudden, that started sounding very political to people. I am not necessarily pro-Obama or pro-Hillary Clinton. I am pro-people. As we were getting ready to release (the album), the political shift in the country happened, and we just felt it was time to raise our voices.

DT: Why did you guys decide to give free tickets to shows to Dreamers?

EC: That started like nine years ago when we made our first music video. We were already showcasing stories of undocumented kids. I had the opportunity to (find) an arts program that was placed in an immigrant neighborhood, and for me, it wasn’t political. I remember being 7 years old and not knowing English very well. That was scary. So I found these kids making art, and I asked the director, “Can I give them guitar lessons?” We started a music camp in the community, and I started understanding the complexity of their family situations, especially (that) they didn’t have their papers. I don’t know much about politics, but I know that kids need to not feel fearful, and they need to feel like they have a place. I know if you affect a kid psychologically, that has permanent effects for the rest of their life. For us, it is the least we can do, and it is more of a symbolic gesture. We are going to celebrate that there are people who love cultural diversity in this country. Those people are going to be here tonight, and we are going to have a great time.