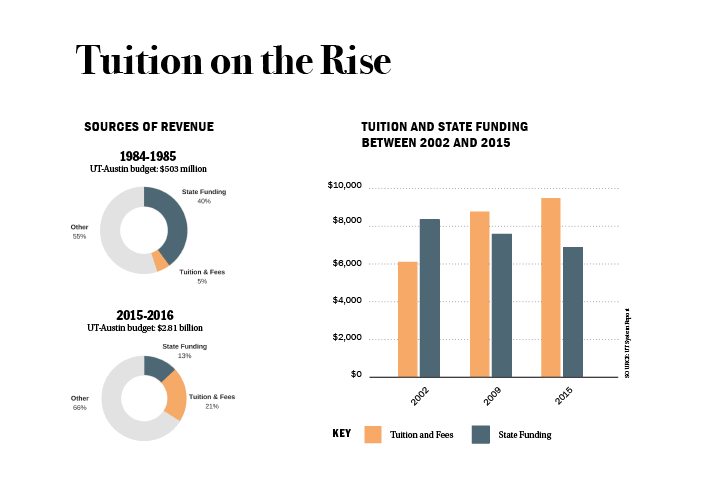 With possible tuition increases on the horizon, a Senate of College Councils survey is collecting student opinions on tuition until Wednesday night.

With a $20 million budget reduction in June, University administration is assessing whether to recommend more tuition hikes for the 2018-2019 and 2019-2020 academic years. The data from the Senate’s College Tuition Budget Advisory Committee survey will be used to inform college deans about student concerns.

Senate president Austin Reynolds said the survey gives students the opportunity to propose other ways to balance growing budget constraints and student needs. As of last Friday, Reynolds said about 2,000 students had filled the survey.

“(Tuition is) not the only way to go about bringing revenue into the college,” English senior Reynolds said. “I feel that’s where the students’ voice is important, because we can talk about what resources we value and if students feel comfortable with a tuition increase.”

Executive vice president Maurie McInnis said tuition increases have become necessary to cover the costs of inflation as the state continues to cut funding for universities. State funding for UT-Austin decreased from 58 percent to 42 percent between 2002 and 2015, according to the UT System report.

“States pay a smaller and smaller portion of what is necessary to educate students,” McInnis said. “So increasingly more and more costs are being shifted to students through increases in tuition.”

“I do think generally students are concerned about tuition every year,” Reynolds said. “I think a very small percentage of students actually know how tuition is handled at the University.”

McInnis said the TPAC has not yet decided if a tuition increase will be recommended for the following academic years, but TPAC will take student input into consideration.

Nursing sophomore Julia Vasquez said she didn’t know of the survey until a Monday tabling event by Senate. She said she doesn’t know much about the tuition-setting process but is not surprised tuition might be raised again.

“Every year I’ve just heard that there’s the possibility of tuition increasing,” Vasquez said. “I didn’t think it would be likely for there to be a decrease anytime soon.”

Vasquez said she would not appreciate further tuition increases as a student paying her way through college.

“I didn’t receive any financial aid, so it’s already enough stress in addition to school and passing classes,” Vasquez said.

Public health senior Holly Bowles said she hasn’t been personally impacted by past tuition increases but knows the rising costs have impacted some of her friends.

“Lowered tuition would be great, but at the same time there are necessary functions and things that make UT great that are kind of necessary,” Bowles said. “Maybe raising tuition wouldn’t be the worst thing in the world if they’re also making a greater effort to provide more scholarships for students.”