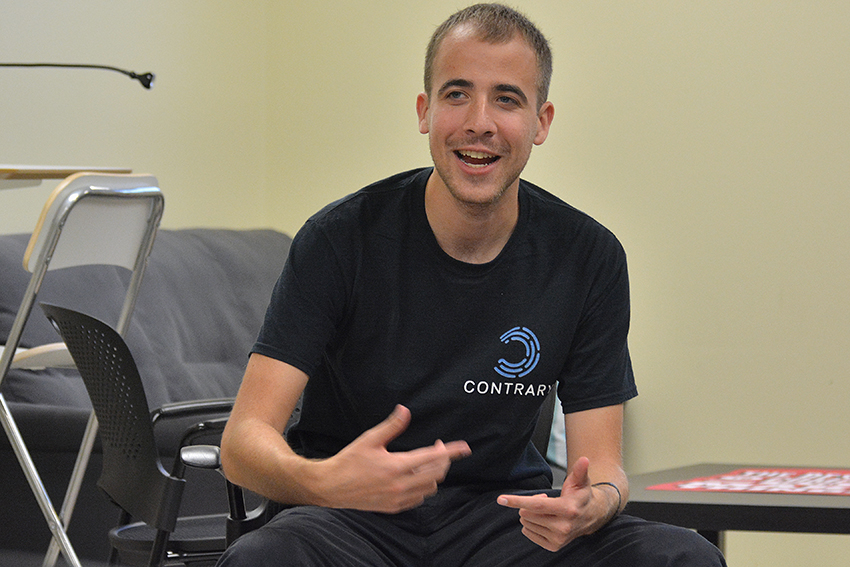 Students with an entrepreneurial streak found themselves sitting around a coffee table on Wednesday evening in the Longhorn Entrepreneurship Agency Co-Lab for an intimate discussion with Eric Tarczynski, founder of venture fund Contrary Capital.

Tarczynski drew upon his own experience with Contrary Capital, a student-driven pre-seed venture firm that seeks out college campus startups, to offer advice.

“I had the idea for Contrary when I was still in school,” Tarczynski said. “There had been this explosion of entrepreneurship that happened at Northeastern over those four years I was in school. Not only was it the culture, but also just the caliber of entrepreneurship companies that were being started.”

Contrary Capital is dedicated to helping develop startups by utilizing their on-campus partners, who look for local startups who are in need of funding. Backers at Contrary Capital come from companies, such as the founders of Tesla and Twitch.

While the trend of startups continued to grow, Tarczynski said he noticed that venture funds were not looking at startups on college campuses.

“I knew (this explosion of entrepreneurship) wasn’t happening in a vacuum, because I’d reach out to my friends from other schools around the country and ask them if a similar thing was happening at their schools,” Tarczynski said. “Nobody was really doing anything about it.”

Harrison Haas, a UT on-campus partner, said the partners of Contrary Capital are responsible for finding companies, reaching out to them and educating them.

“I represent Contrary in full when Eric isn’t here, which is 99 percent of the time,” chemistry and finance sophomore Haas said. “I’m really looking to find companies that we can invest in. I get to walk around with a hypothetical checkbook and look for companies and give them advice based on my experience. I decide if we invest in them or not.”

UT’s successful business and engineering programs, coupled with the large student population, makes the campus an ideal place for a student to begin and fund a startup, Tarczynski said.

“I’m into those intro business classes that concern entrepreneurship and IT, MIS, that kind of thing,” Shah said. “It’s kind of thrown me into this environment, the startup, network effects. It’s an environment I never thought I’d be a part of and it’s fascinating.”