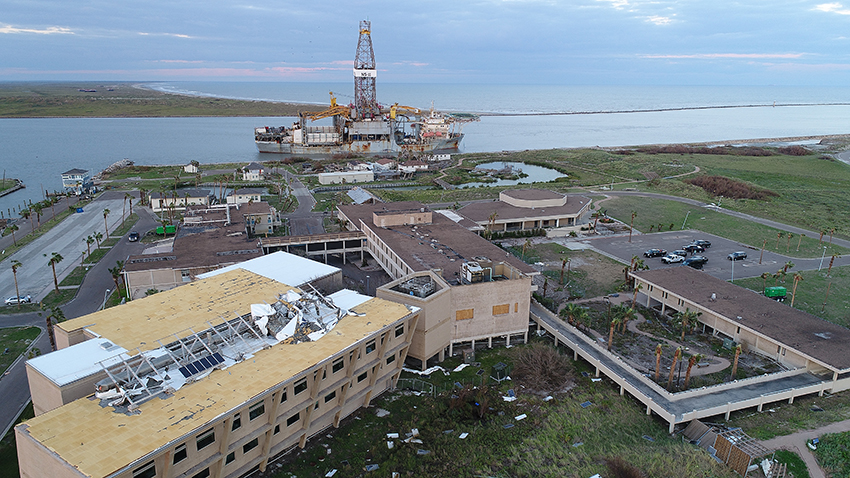 The Marine Sciences Institute, established in 1946, is the oldest marine research facility in Texas that works in scientific education and outreach. The devastating events of Hurricane Harvey have left it in a state of disrepair.

This isn’t the first natural disaster to strike the institution. Four hurricanes have hit Port Aransas’ Gulf Coast beaches, fish-filled waters and research sites in the past 50 years. Hurricane Celia, the most destructive, damaged a University research vessel in 1970, spurring significant change as the institute began a wide-scale expansion in its aftermath.

But when Harvey hit in August, communications coordinator Sally Palmer said several new buildings faced the brunt of the damage due to heavy wind-driven rain and roof failure. Additionally, the recently constructed Estuarine Research Center, which serves as a “living laboratory” for the institute’s researchers and educators, suffered damage to its marine life.

“Much of our research has been impacted,” Palmer said. “Fish have been lost. Our seawater supply system (is) significantly distressed.”

In the first few weeks following the hurricane, all operations were put on indefinite hold. Palmer said research has temporarily moved to the Texas A&M Corpus Christi location until the institute becomes operational.

“Our biggest problems are roof and water damage,” Palmer said. “These are the two issues we need to fix before we can move our staff in again, and we can get back to normal.”

In addition to the pressing need to reroof the institute’s numerous structures, Port Aransas requires further significant repair. Palmer said the port endured the storm’s eyewall, the hurricane’s most devastating region, for over 90 minutes, wreaking serious harm to marine life.

For UT students who use its research vessel as an educational facility, the damage to Port Aransas is a considerable disappointment. Plan II biology professor Ruth Buskirk said a semester trip to the port has been an essential component of her class for years.

“We spend a weekend at Port Aransas. We stay in the dorms there, walk along the pier and the beach and go out in the research vessel,” Buskirk said. “The boat trip is always the highlight.”

The boat, a research vessel named Cady, is currently operational, but Buskirk said both the port and its resources were deemed unsafe immediately following Harvey.

Palmer said that getting rid of mold and asbesto — a mineral that aggravates lung tissue and can cause a form of cancer called mesothelioma — is a significant priority. Additionally, repairing the roofing system poses a considerable challenge.

Environmental science freshman Ari Nehrbass said she has yet to experience all the institute has to offer.

Palmer said although much of the previous ongoing research cannot be salvaged due to the environmental impact of the hurricane, the staff is already looking to the future.

“Four of our faculty have received grants to look at the environmental impact of the storm,” Palmer said. “Optimistically, we expect opening to the public again by February.”