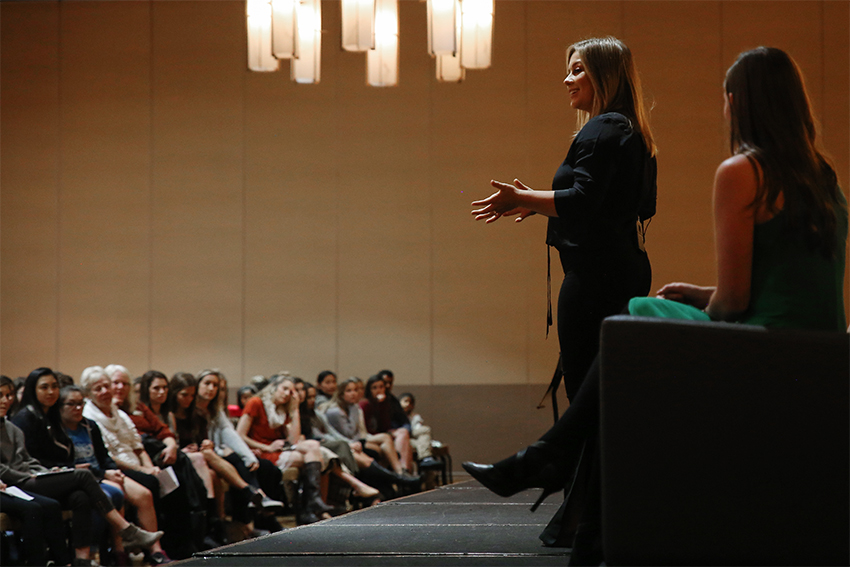 Olympic gold medal gymnast Shawn Johnson is no exception to being a student who feels overwhelmed by the constant pressures of everyday life.

The unusual challenge of being a 16-year-old girl representing her country in the Olympic Games made Johnson’s rise to glory a difficult one, she said.

“The world will set expectations for you,” Johnson said. “I can tell you, I’ve stood on an Olympic pedestal, and I’ve felt purposeless.”

Johnson said she completely felt a loss of identity during the 2012 Olympics after she fell short of a gold medal in the individual all-around competition.

“I remember the day waking up after the Olympics, it felt like I ran into a brick wall,” Johnson said. “You just have to find a community that will build and restore your hope.”

Later, to her own surprise, Johnson would go on to win a gold medal on the balance beam apparatus. Johnson said it was this courage to pick herself back up that inspired her to begin speaking publicly to other young women.

Biology freshman Claire McCutcheon said Johnson’s humble words about her career is encouraging as a student.

“It was really cool to hear someone that has had so many accomplishments still talk about her failures and humble herself in that way,” McCutcheon said. “That was really encouraging to me that we’re all kind of in the same boat.”

Johnson said that she thinks society pushes kids too hard to pursue things they aren’t pleased with, and it’s become an issue.

“You can see in society today that we push kids too hard, and I hate it,” Johnson said. “I don’t care if you’re good at something, whatever you do should be what you want.”

Undeclared freshman Kate Gonzalez said she felt inspired to pursue what she desires most.

“Being a first-year (student) at a big university like UT, I’ve been recently contemplating what I want to do since I’m undeclared,” Gonzalez said. “I’ve been pursuing nursing, but I also have a big passion for dogs. During her talk, I was actually considering what I love.”

One of Johnson’s strongest messages came when an audience member asked her to recite one of her favorite quotes.

“‘If you think you can, then you will,’” Gonzalez said, quoting Johnson.