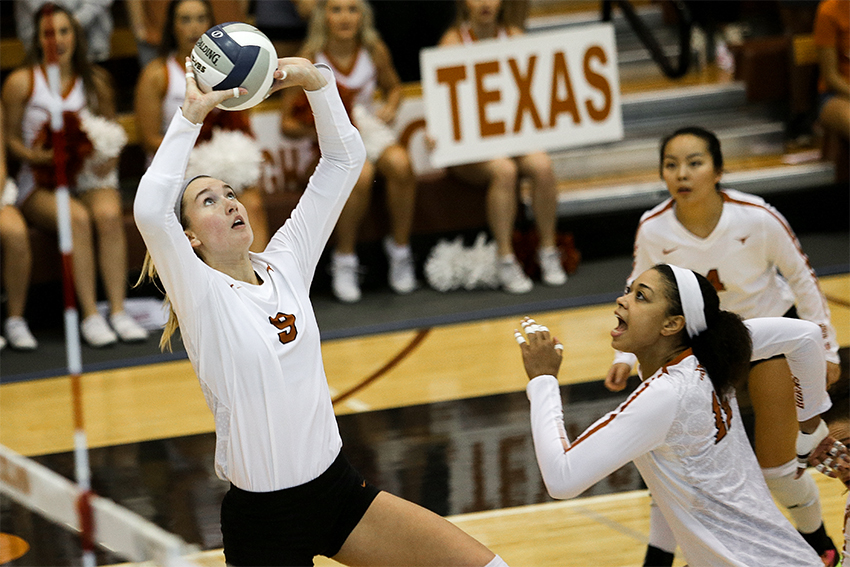 Freshman setter Ashley Shook prides herself in facilitating for her teammates, preferring to deliver an on-point pass to a hitter rather than elevating for a kill of her own.

But the Plainfield, Illinois, native took matters into her own hands Wednesday night when Texas hosted TCU at Gregory Gym, leading the Longhorns to a clean  3-0 sweep.

Shook created havoc for the Horned Frogs in the first set, catching them off guard on three separate occasions with a dump down the heart of the TCU defense.

Shook did it all for Texas, recording 13 assists, three kills, three digs and an ace in the first set as the Longhorns cruised to a  25-17 victory.

“It just worked out that way,” Shook said. “I try not to predetermine what I’m going to do, but (TCU) wasn’t really on me and the passes were perfect, so I just took it.”

The Horned Frogs responded in the second set, though, tying the score at 22 and forcing Texas to burn a timeout. But with TCU forced to respect Shook on offense, the Texas hitters broke free.

Sophomore outside hitter Micaya White tallied five key kills, and Shook set up the final three points for her teammates as the Longhorns edged out a tight 25-23 win.

“As a coach, the one thing I don’t like playing against is setters that can dump,” head coach Jerritt Elliott said. “(Shook) brings that to the table and keeps (defenders) off balance. It increases our chances of winning.”

The Longhorns left no doubt in the closeout set, erupting for a 7-1 run to give them a 13-7 lead. The Horned Frogs finally broke, surrendering 12 of the final 19 points as Texas earned a 25-14 victory to complete the sweep. Shook finished the outing with 43 assists, five kills and seven digs in the win. White also joined in with a team-high 14 kills.

The win improves the Longhorns’ Big 12 record to 12-0 with just four matches remaining on the regular-season schedule. Texas has dominated in conference play, winning seven of those 12 matches in the form of a sweep. But with a championship on their minds, the Longhorns still know there’s room for improvement.

“We need to work on not letting teams catch up on us,” senior outside hitter Ebony Nwanebu said. “We need to play like how we did in that third set.”

The Longhorns now shift their focus to a road match against No. 24 Iowa State on Saturday. The Cyclones enter the match as winners of six of their past seven outings, including a 3-1 victory over No. 11 Kansas.

“We need this one,” Elliott said. “It’s good for RPI, and it’s good for our team. We’re going to learn where we stand in the conference, so we’ve got to take care of this one.”