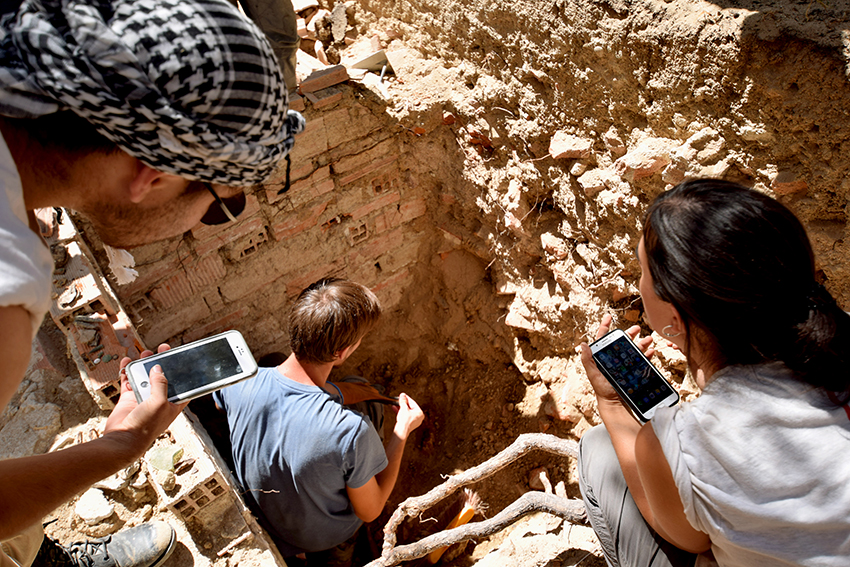 MADRID — Pockmarks from German Mauser rifles and graffitied fascist symbols in Spain’s capital city quietly tell the story of the country’s painful past.

Graffiti can be painted over and pockmarks filled in, but more difficult to move past is a conflict that still lives and breathes in the country’s people.

It has been 78 years since the end of The Spanish Civil War. But with 200,000 casualties and the memory of a 36-year dictatorship, those tensions are still felt today.

In Alfredo Gonzalez-Ruibal’s household, they didn’t discuss the Civil War or the dictatorship that followed. Growing up in Galicia, Spain, Gonzalez-Ruibal said his grandparents and parents had conflicting views about it and neither ever really broached the subject.

“The dictatorship was always present in my house,” said Gonzalez-Ruibal, an archaeologist with the Spanish National Research Council. “My grandparents were conservative people, but my parents were not … The Spanish Civil War wasn’t hidden or forbidden to talk about; it was simply something that everybody knew had happened. It was seen as a minor traumatic episode that paved the way to the dictatorship.”

Now, Gonzalez-Ruibal researches modern conflict archaeology and has been coordinating a project on the archaeology of the Spanish Civil War and the Franco dictatorship since 2006. This summer, I traveled to Spain to participate in a dig led by Gonzalez-Ruibal that centered around Madrid’s Hospital Clinico and the Nationalist troops who fought there.

Located in a park in Madrid’s University City, our dig was easily accessible to the public; it wasn’t uncommon for people to stop by and ask about what we were doing. While some people were curious, others made it clear they believed the artifacts and structures we unearthed were better left buried.

Gonzalez-Ruibal is used to the criticism. Since he began studying the Spanish Civil War, he’s been frequently attacked online by commenters from the far-right, who usually fling accusations that his work is biased and only seeks to vilify the Nationalists who fought for Franco.

“People like to be able to cling to the stories they’ve been told,” Gonzalez-Ruibal said. “It’s very difficult and painful to revisit the past and address all the assumptions you have. If it’s something that disrupts the narratives you’ve believed for 30, 40, 50 years, it’s really traumatic to get rid of these wrong ideas and change your mind.”

But studying the war has caused Gonzalez-Ruibal to leave behind some of his own notions as well.

“As I started reading about it, I realized it wasn’t such an obvious conflict between good guys and bad guys,” Gonzalez-Ruibal said.

While Gonzalez-Ruibal has also studied non modern societies in Ethiopia and Brazil, the Spanish Civil War is different because, despite the fact that the dictatorship has been over for 42 years, the issues that it created are still alive today.

The most prominent example is Catalunya. During Franco’s dictatorship, residents of the country’s autonomous region were often subject to censorship, exile and a total suppression of their language and culture. For many Catalans, the violent response of the Spanish police force during the independence referendum on Oct. 1 was seen as an echo of the suppression they experienced during the dictatorship.

At a time when the country is seeing these decades-long tensions boil over, Gonzalez-Ruibal said it’s more important than ever to study the source of the conflict.

“The main challenge of the Spanish Civil War is that it’s an ongoing conflict,” Gonzalez-Ruibal said. “It’s not something that stopped in 1939 and not even in 1979 (with the end of the dictatorship.) Most of the things that were at stake then are still at stake today.”

Editor’s note: The Daily Texan’s Helen M. Powell scholarship gives one current or ex-staff member the opportunity to travel and report outside of Austin. This year’s recipient, Cat Cardenas, traveled to Spain to write about the country’s present-day issues.