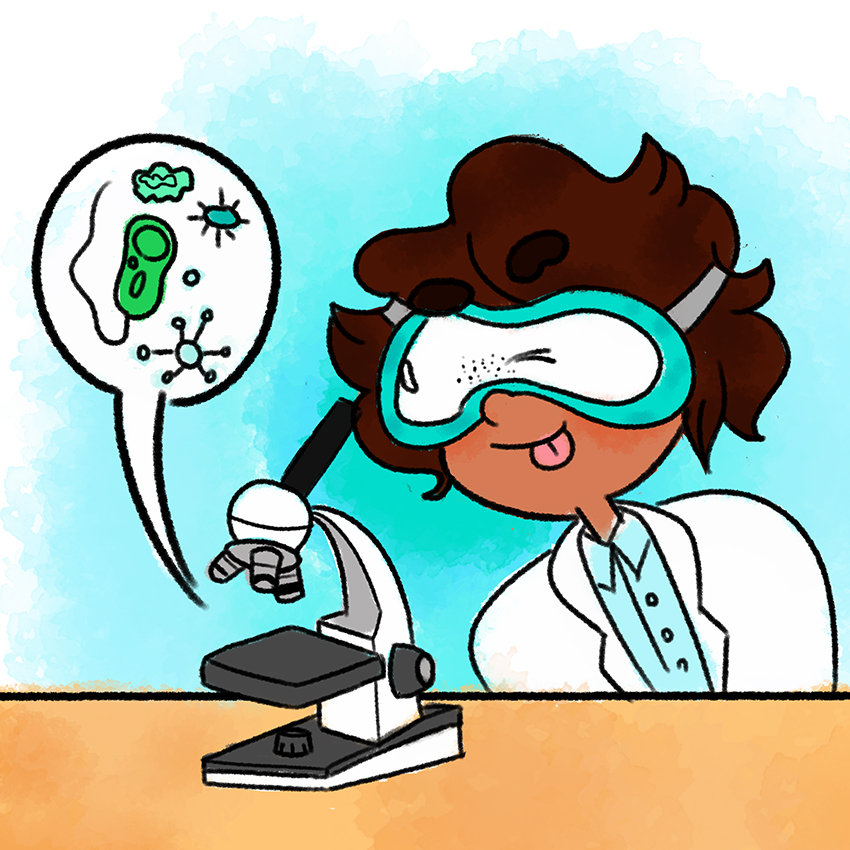 Students are learning how to fight bacteria with antibiotic-producing bacteria and looking for new antibiotics in Antibiotics: Research and Function, a research stream run by the College of Natural Sciences.

“We mostly collect dirt samples from various places around campus,” Palmer said. “We’ll often look for recently turned over soil like in landscaping and flower beds. We avoid places that are more likely to contain pathogenic bacteria, like the turtle pond.”

Students spread soil samples on petri dishes with a growth medium — a medium that supports the growth of microorganisms or cells — that enriches for antibiotic-producers and isolates a particular strain. Afterward, students can then identify the organism and discover its role in microbial communities through physical and biochemical means.

After they identify the proper bacteria, the students use organic solvents to extract those bacteria’s antibodies. Chromatographic techniques, which separate components of mixtures, are then used to isolate the antibiotics.

They also study the molecular makeup of the antibiotic-producing bacteria and their efficacy against other bacteria through a technique called disc assays, which involves examining how antibiotics inhibit the growth of test bacteria.

Furthermore, the stream’s research includes using polymerase chain reaction, or the process of amplifying genes, to identify small parts of bacterial genomes. They then compare these genetic sequences to those in online databases to determine whether a new antibiotic has been discovered.

The lab is flexible depending on students’ interests and lets the students write their own research proposals, Palmer said.

Nishant Kashikar, a biology junior and member of the stream, said  participation in the stream has enriched his college experience.

“I like lab because it gives me a chance to apply the things I’ve learned in class,” he said. “I also get to do worthwhile research that benefits healthcare.”

Since they began work in 2013, the lab has collected over 100 strains of potential antibiotic-producing bacteria and has developed protocols to determine what bacteria can produce what kinds of antibiotics, Palmer said. They have also sequenced the genomes of five different bacteria, one of which may be a new species.

“We’ve also got several candidates for antibiotics, but we’re still working on some of the chemistry to identify the molecules,” Palmer said.

Though further research is needed to determine the exact roles of the different types of bacteria, the lab has also been keeping track of how different bacteria strains grown together affect their antibiotic-producing characteristics.

Palmer said he finds that participation in streams transforms students into scientists because it teaches them how to design experiments, read about other research and communicate their work effectively.

“I’ve learned interesting techniques that I can apply in future research, and I’ve also learned how to be a true scientist,” Kashikar said. “It has really helped solidify my choice in becoming a healthcare professional.”