A capella group prepares for Acapalooza and competition 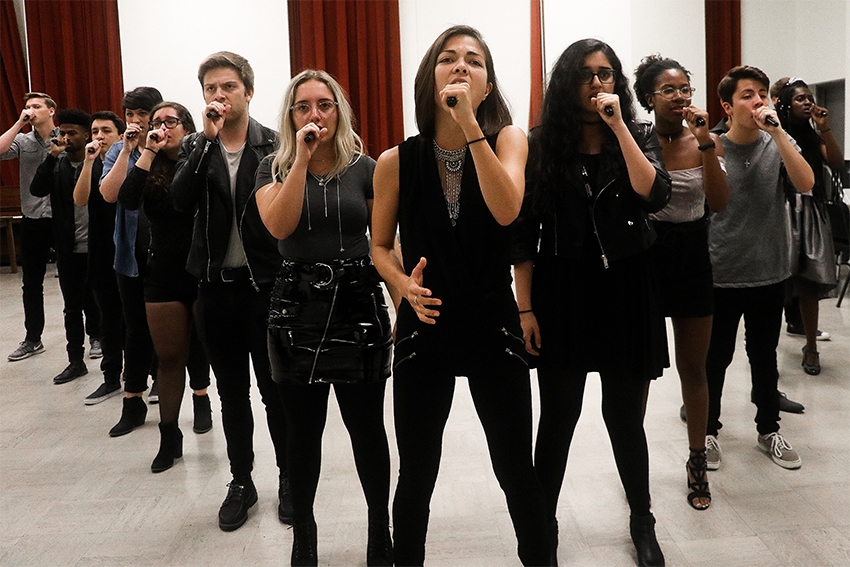 While movies like “Pitch Perfect” portray a capella as a cut-throat world, UT-Austin’s a capella groups are working to prove that their rivalries can be far more friendly than their on-screen counterparts would have you believe.

This evening, One Note Stand (ONS), a premier UT a capella  group, will participate in Acapalooza, a concert benefiting Student Emergency Service’s Hurricane Harvey relief fund. According to ONS president, Tasha Torres, the groups will use the event to prepare for upcoming competitions while also working to raise money for the relief fund.

Torres said she thinks the benefit show will be successful not only due to its worthy cause, but because of the tremendous ability of the groups performing.

“The tonality and type of music that we do is also very different. We do kind of, I don’t know, almost creepy (music), it’s ominous music, but also very powerfully ominous music,” Torres said. “They tend to do more upbeat jams.”

“She and I actually kind of bounce ideas off each other rather than feel some kind of tension or competition,” Bowman said. “We’re both really supportive of each other and each other’s groups.”

ONS’s current darker and more ominous set reflects what Bowman believes to be the evolution of the group’s overall attitude. While they were initially cautious of the dark vibe their set had taken, she said they eventually decided to roll with the sound. According to Bowman, the group has been rehearsing for both the event and competition since last spring.

“I think our group has kind of evolved from this kind of very sexual, sensual vibe that we used to have (to a) kind of more badass kind of dark edginess,” Bowman said. “We’re probably the most prepared we’ve ever been for competition.”

Though ONS has been in rehearsal for the past month, the group did express concerns about one aspect of their performances: the choreography.

The precompetition jitters have set in, but assistant music director Maha Haque said she believes competition is giving ONS the push they need.

“I think competition really drives us to get our music to a level where we want it to be,” Haque said. “Most of us are pretty goal oriented; it’s a good motivator for a lot of us.”