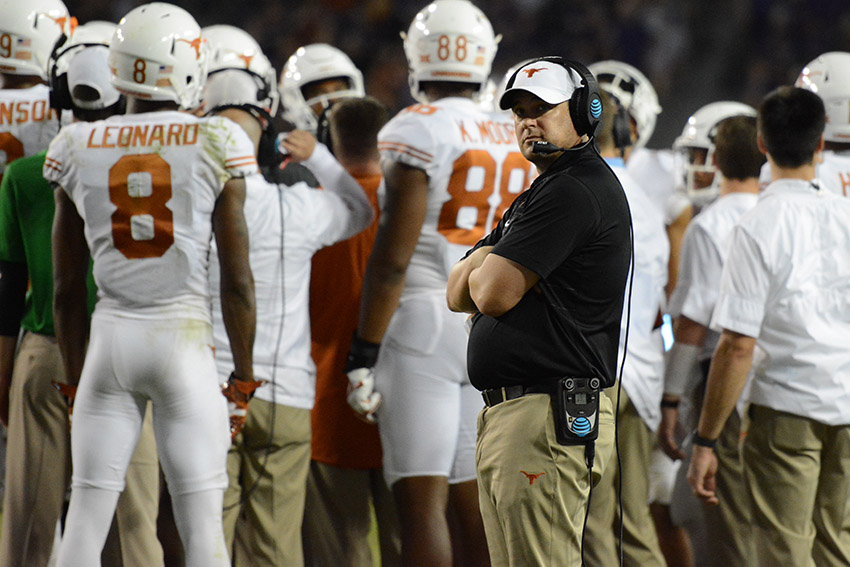 It’s been three years since former head coach Charlie Strong spoke to reporters following Texas’ fifth loss of the season, telling the media five losses in a year “will never happen in this program again.” The sentiment came off Texas’ second straight losing season, and Strong’s first after replacing Mack Brown at the end of the
2013 seasons.

Fast-forward four seasons and one head coach, and Strong’s proclamation looks absurd in hindsight. Since the beginning of Strong’s tenure in August 2014, Texas has gone 20–26, with first-year head coach Tom Herman sporting a 4–5 record heading into this Saturday.

Herman entered the programs with high hopes, looking to reverse the program’s culture in his first season. After three straight losing seasons, Herman’s found a program lacking the intensity necessary to compete in the Big 12.

“Losing has to be awful,” Herman said in July during Big 12 Media Days. “You can never get used to losing. That’s one of the biggest maybe downfalls for a lot of teams is you get used to losing … It’s not just ‘oh, well, we’ll get them next week.’ No, it’s ‘the sky is falling’ type stuff.”

But for as much confidence as Herman could instill in his team before the season opener, it hasn’t been enough to overcome Texas’ personnel issues, especially on the offensive end. The problems have been most glaring on the offensive line, which Herman noted at his press conference on Monday. Texas has spent all of conference play without All-American left tackle Connor Williams, and currently starts freshman Derek Kerstetter at right tackle. It’s an inexperienced unit, one that has too often failed to protect its quarterbacks.

“Fixing the problem (on the offensive line) is probably a very tall order to expect in three weeks,” Herman said on Monday. “I think the biggest thing that we can do as a staff is mask the deficiencies as best we can. I think that comes in getting the ball out of the quarterback’s hands quicker. It comes in, you know, not maybe asking our offensive linemen to block anybody one-on-one; is to try to set up as many double teams as possible in the run game.”

Texas’ offensive line struggles have exacerbated the Longhorns’ other shortcomings on that side of the ball. The burnt orange running backs have proved to be pedestrian regardless of whom is in the game, with Texas’ top four backs running for a combined 2.3 yards per carry. And with both freshman Sam Ehlinger and sophomore Shane Buechele spending much of the year on the mend, the Longhorns’ passing attack has been inconsistent. Neither quarterback has been able to gain a hold of the starting position, and questions marks will surround the depth chart each week through the rest of the season.

So where does that leave the Longhorns with three games remaining? With a stout defense and manageable schedule ahead (including two home games against teams under .500) Texas could win out, and enter bowl season at 7–5. But such a subpar offense may very well tank the Longhorn defense and cause Herman and company to limp to a disappointing 5–7 campaign.

Once August rolls around next year, the potential disparity in record won’t be significant. The Longhorns will enter the season with an impressive recruiting class, and an added year of Herman’s system. Big things will be expected.

At this point, the priority for Texas should be the health of its team, most notably Ehlinger and Williams, and building the next core of the Longhorns’ future. A bowl appearance may boast spirits heading into the offseason, but it will have little impact on the future of the program. The Longhorns failed to reverse its culture in 2017. Now their focus must be laying the groundwork for 2018 and beyond.