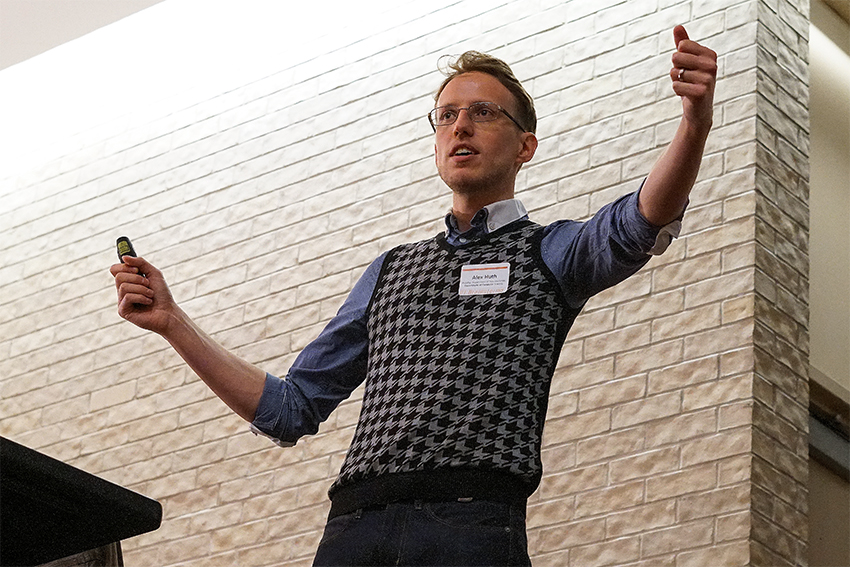 Seeing a horse and hearing the word “horse” trigger neural activity in the same location of the brain, according to neuroscience professor Alexander Huth at a lecture Thursday.

Huth’s lecture was a part of the UT Brainstorms series, a public outreach program from UT’s Department of Neuroscience to address topics about brain function and new research.

“The question that I want to get at is what happens inside your head when someone talks to you,” Huth said.

Huth said that his team’s first experiment involved participants listening to autobiographical stories while laying in a magnetic resonance imaging scanner, which records bloodflow in the brain to reveal neural activity. The resulting scans showed certain parts of the brain respond to specific words.

“We try to figure out, based on (certain) words, can we predict what the brain is going to do?” Huth said. “Luckily we have a technique to do this … called voxel-wise modeling.”

A voxel is a small area of the brain that responds to a specific word or type of word. Huth said an individual voxel can contain maybe a million neurons.

Across the subject pool, emotionally charged words lit up certain voxels, while visually descriptive words lit up other areas depending on neural activity levels, Huth said.

In Huth’s second experiment, he examined voxels’ responses to visual stimuli. The experiments’ results showed a correlation between location of neural activity in response to visual and auditory stimuli of the same category. For example, the same voxel lit up for people when seeing a dog and when hearing the word “dog.”

Neuroscience sophomore Allyson Morgenthal said she was surprised specific words trigger responses in designated areas of the brain and would be interested in cross-cultural data on the subject.

“Since (Huth has) only used seven subjects, it’s hard to tell how it would be different across cultures,” Morgenthal said. “That would be really interesting to see.”

Psychology assistant professor Jessica Church-Lang, who served as a panelist at the event, said the results of such a study would be dependent on when the subjects learned each language.

“Babies are kind of universal speakers, but by the time they’re a year old their brain has tuned to their native tongue … (and) the brain becomes less flexible,” Church-Lang said.

Huth said he plans to research how neural maps vary across subject groups and if brain signals can be used to decode internal speech.