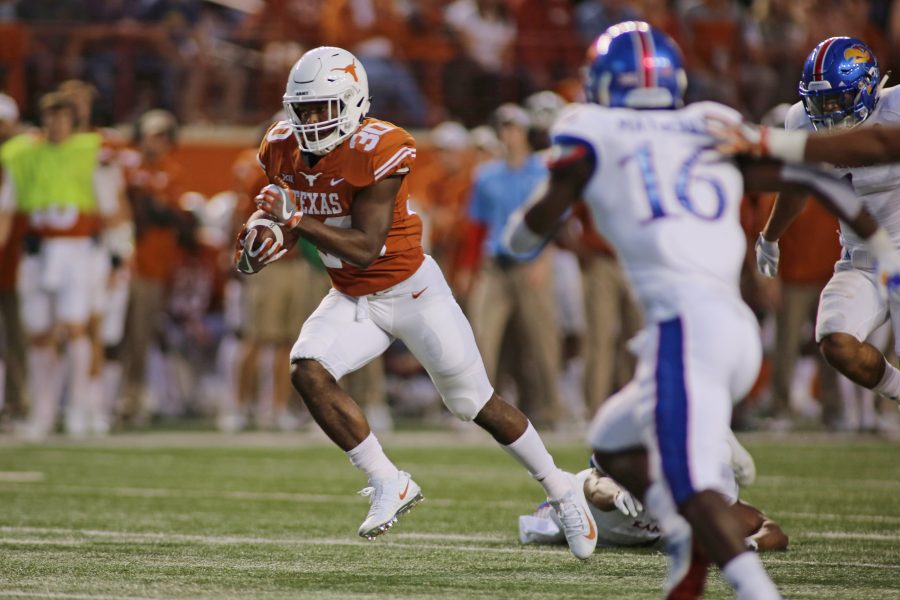 Tom Herman doesn't care to look and see what the betting line is on his upcoming game.

The Longhorns were 33-point favorites heading into Saturday night’s meeting against Kansas, a bottom-feeder program that is now 1-9 after Texas’ 42-27 win at Darrell K Royal-Texas Memorial Stadium.

Perhaps it was a lot for a Texas team entering Saturday with a 4-5 record, fresh off its worst offensive performance of the season last weekend against TCU in Fort Worth. Never mind the fact that the Longhorns shockingly lost to Kansas last November in Lawrence.

Kansas proved why it was a 33-point underdog from the opening kick, when it attempted to catch the Longhorns off guard in their own house.

After winning the coin toss and deferring to the second half, the Jayhawks boldly tried an onside kick. The plan didn’t work, however, as the Longhorns were ready for it and recovered the ball at Kansas’ 49-yard line.

On Texas’ first play from scrimmage, sophomore quarterback Shane Buechele delivered a 49-yard touchdown pass to Joe, who got behind the Jayhawks’ secondary.

The Longhorns were up 7-0 just nine seconds into the game. But fans would’ve been remiss to not draw flashbacks to last year’s meeting in Lawrence. Texas scored on its first play from scrimmage in that game as well to take an early 7-0 lead over the Jayhawks. The Longhorns went on to lose 24-21 in overtime, one of the worst losses in program history.

This night would not prove haunting for the burnt orange, though. Texas received boosts from a host of players in the first half to grab control of the game, never letting Kansas get firmly within striking distance.

Fifth-year senior defensive back Antwuan Davis needed just one half to turn in the best performance of his Texas career. Davis intercepted the Jayhawks twice, including a pick-six to put Texas up 14-0, and recovered a Kansas fumble on a punt return.

“It’s a great feeling to be out there with this defense, with this team,” Davis said. “I don’t want to be a missing piece. I want to be a part of this puzzle.”

Freshman running back Toneil Carter and sophomore wide receiver Lil’Jordan Humphrey each rushed for scores in the first half. Freshman quarterback Sam Ehlinger, who didn’t start despite being cleared from a head injury, came in late in the first quarter and tossed an eight-yard touchdown pass to freshman tight end Cade Brewer.

Early in the second quarter, Texas tried its hand at a 44-yard field goal, but senior Mitchell Becker missed wide left, another chapter in the Longhorns’ kicking woes this season.

Texas scored more points in the opening quarter on Saturday night — 28 — than it has total in five of its games this season. The Longhorns led 35-17 heading into halftime.

But the second half saw mostly offensive ineptitude.

The biggest story out of Saturday night was simple — the Longhorns (5-5, 4-3 Big 12) got one win closer to bowl eligibility. One more win can help salvage what has been an erratic first season under Herman.

“There’s no lack of confidence, or there’s no issue with perception,” Herman said. “Winning for us right now is going to be hard, and that’s OK. That’s OK. As long as we win.”