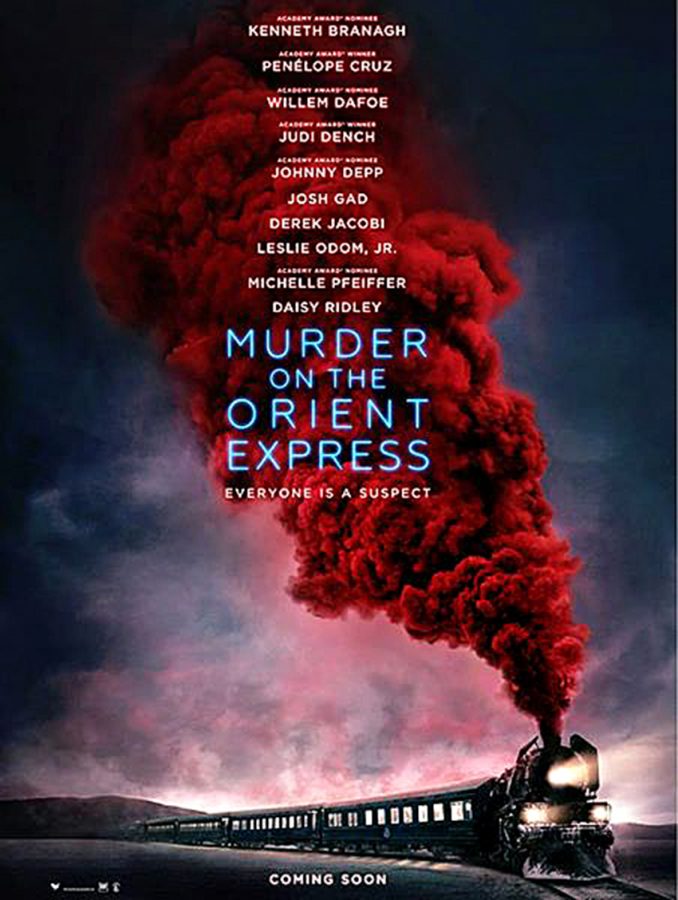 Agatha Christie’s “Murder on the Orient Express” has been subject to numerous film and television adaptations, but none of them looked as crisp and rich as Kenneth Branagh’s take. Branagh directs the picture and stars as the film’s hero, detective Hercule Poirot, displaying both his best and worst tendencies as a filmmaker in the process.

“Murder on the Orient Express” takes a while to get chugging, devoting a lengthy section of its first act to explaining how Poirot gets on the train. Yet it’s also the strongest part of the movie, as it’s a joy to see Poirot mingle with his clients and friends. Poirot is one of literature’s most esteemed detectives, and Branagh is immensely likable in the role. He focuses on Poirot’s eccentricities, such as his need for balance and order, and he wears what may be the most impressive mustache to ever grace the silver screen.

Aboard the train, Poirot encounters a diverse band of strangers, among them a governess (Daisy Ridley), a doctor (Leslie Odom, Jr.), a professor (Willem Dafoe), a princess (Judi Dench), a missionary (Penelope Cruz) and a widow (Michelle Pfeiffer). Poirot also meets Samuel Ratchett (Johnny Depp), who asks for his protection from assassination. Poirot declines.

The next day, the train is halted by snow — and Ratchett is found dead in his room, stabbed 12 times. Peculiarly, his room is still locked. Poirot later discovers Ratchett was actually connected to the murder of a child belonging to the kind and generous Colonel Armstrong. Poirot surmises the killer is still on the train, and with rescuers coming to free the locomotive, he has limited time to capture the culprit.

Though it sets up its plot at a leisurely pace, “Murder on the Orient Express” rushes through the meat of Christie’s story as Poirot briefly interviews his suspects. The talented ensemble cast is largely wasted in one-dimensional roles that Branagh overshadows all too often. Poirot’s monologues, his wistful declarations to a deceased lover and his obsessive habits too often distract from the other performances. Legendary thespians Judi Dench and Derek Jacobi barely register, and only Pfeiffer makes an impression. All of the suspects can either be reduced to stereotypes or have no personality at all, playing second fiddle to Poirot. Their ties to the case are vaguely explained and they too easily betray their secrets to Poirot, making his job rather straightforward and the climactic reveal incredibly dull.

Branagh’s impulses toward showmanship elevate the picture as much as they hinder it. The lavish and stunning sets are shot on 65mm film, and the result is breathtakingly beautiful. But Branagh also adds two unnecessary action sequences that are stilted and undramatic. Worse, the final confrontation between Poirot and his suspects takes place at a table that heavy-handedly calls to mind the Last Supper and features shouting and weeping that would be more at home in a soap opera.

Nonetheless, “Murder on the Orient Express” achieves some semblance of poignancy when it mediates on how one death can fracture the souls of many. Poirot remarks several times that there is only right and wrong and nothing in between, but he finds that longing for catharsis can drive good people to commit evil. In spite of his missteps, Branagh effectively brings out the emotional core of Christie’s novel. “Murder on the Orient Express” has trouble staying on the tracks, but at least it pulls into the station.