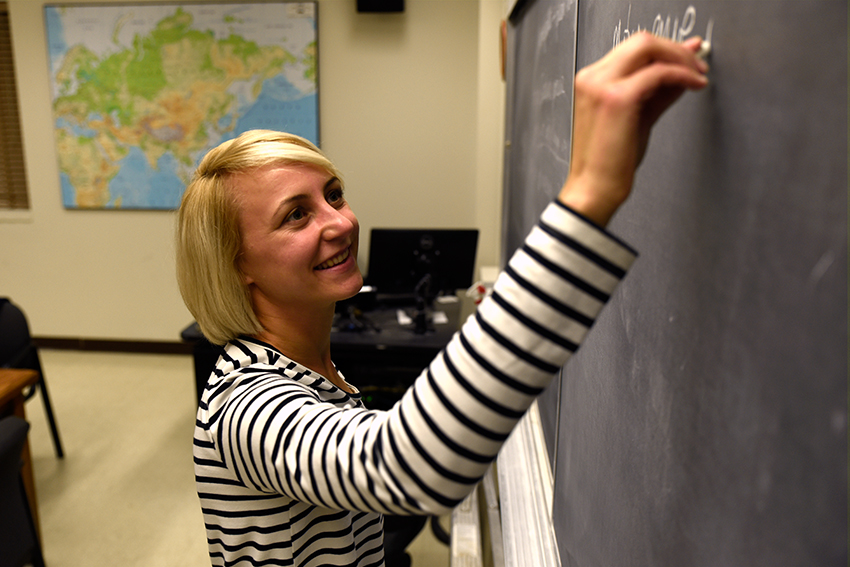 Polish descendants make up less than 2 percent of the Texan population, yet the voices flowing through the halls of Burdine every Thursday evening  might make it feel like you’re in Krakow.

Tutor Agnieszka Makles hosts a Polish conversation hour every Thursday in Burdine which she says is a vital opportunity for students who are fluent in the language or just learning to practice it in speech.

“I always tell them no matter how many mistakes you make with a language, just keep talking because other people are always waiting, and they have patience for you to say all that you need to say,” Makles said.

An important part of immersion in learning a language is understanding culture and knowing slang, which Makles said conversation hour helps her students master. Makles has first-hand experience understanding the importance of slang from when she was learning English.

“Everyone was using the phrase ‘that sucks,’ and I swear I thought everyone was saying ‘that’s socks,’” Makles said. “So I thought if something is socks, then socks are dirty, socks are smelly, so they call those things socks. Then somebody educated me that there is a phrase ‘that sucks,’ so nothing for several months was actually socks. These things happen to everybody.”

When she’s not tutoring, Makles said she dedicates the rest of her time at the University to an upcoming research project documenting the Texas Polish dialect, a dying form of the language created when Polish immigrants came to Texas more than a century ago. Makles co-founded the project when she realized she was from the same part of Poland as members of the community.

“I actually know many of the places, the cities where these people are from,” Makles said. “Just to connect with it, that was a push for me.”

For Makles, sharing and preserving language is a passion she has dedicated much of her life to. She said the reward in teaching a language comes from people who continue learning after meeting her.

“What is very interesting is you feel their appreciation when they call you for help after years,” Makles said. “That means they feel comfortable to contact you again and ask for some little thing. That’s the biggest thank you, that they don’t forget you.”