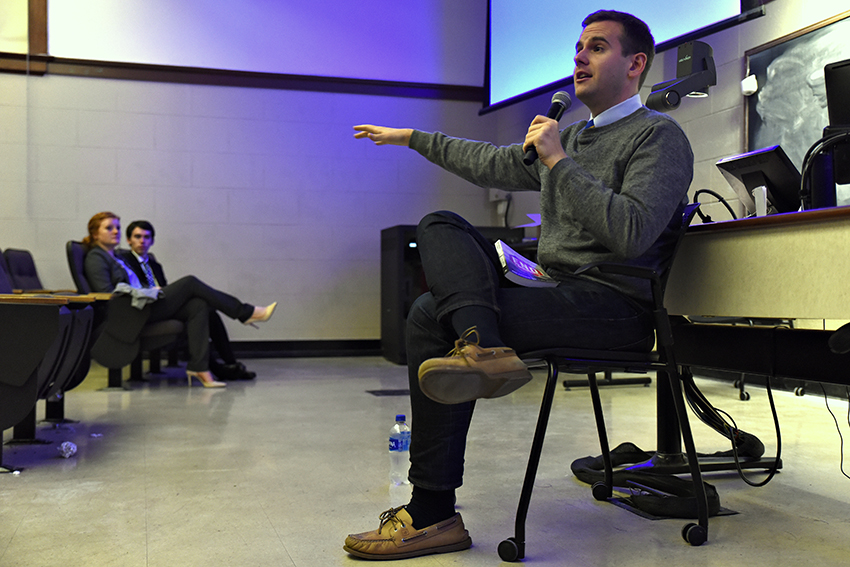 The left is stifling free speech in America by preventing political debates, said FOX News Contributor Guy Benson at an event for the College Republicans at Texas.

“The lexicon of silencing (occurs) where the left takes genuinely important human impulses and phenomena and perverts them into something else in order to silence a group of people or to shut down a base,” Benson said.

The left uses terms such as “microaggressions,” “triggers,” and “privilege” as blanket statements to stop political conversations, Benson said. Throughout the speech, Benson discussed his book, “End of Discussion: How the Left’s Outrage Industry Shuts Down Debate, Manipulates Voters, and Makes America Less Free (and Fun).”

“The reason we pin this more on the left is that … the left dominates academia, mainstream media and the entertainment industry,” Benson said. “The tastemakers of our culture and our politics lean very far to the left.”

Free speech should not be a partisan issue, Benson said.

“We need to talk to each other relatively openly about the problems that we face or else we will never be able to solve those problems,” Benson said. “If we are on constant hair-trigger alert to be offended by what the other side has to say, it’s just an arms race of outrage.”

For psychology sophomore Katelyn Bandy, this issue is prevalent on campus.

“A lot of voices are being silenced,” Bandy said. “With PC (politically correct) culture, you can’t say anything, and if you do, you get horrified looks and a bad grade. I usually just keep my mouth shut unless I’m around people that I know are okay with what I have to say or will at least respect it.”

Some students said they considered Benson speaking on campus as a victory for free speech.

“There’s a certain amount of bureaucratic red tape that has to be cut through to get speakers on campus,” economics sophomore Bryson Cobb said. “If the professors and administration are predominantly left-leaning, conservative speakers will encounter more roadblocks that will make it more arduous for them to make their voices heard.”

It is important to keep a respectful dialogue to maintain a common set of facts, Benson said.

“There is false and there is true,” Benson said. “If that’s eroding completely, then you just live in your own little ecosystem, and you can believe all sorts of completely crazy things. That’s not good for our country.”