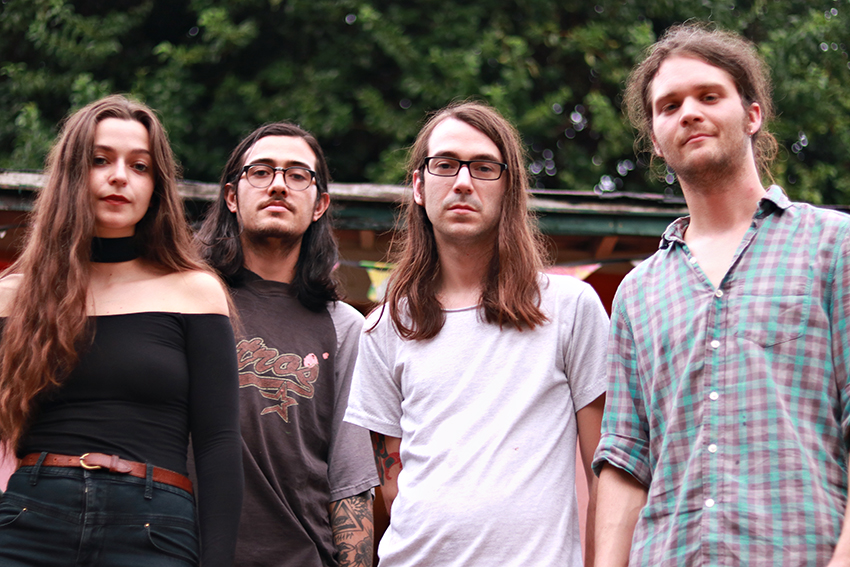 Outside Annabelle Chairlegs’ east side compound, the unrelenting noise of a practice session leaked through the walls. I waited for them to put the finishing touches on the song before knocking on their door, thinking they must be on good terms with their neighbors. Frontwoman Lindsey Mackin greeted me inside the psychedelic convent, plastered wall-to-wall with bright posters showcasing psychedelic curves and bands ranging from The 13th Floor Elevators to Omar Souleyman.

“We did our first album in this living room,” Mackin said, guiding me over the snaking wires and pedals covering the floor. We moved into the adjacent room, centered around the troupe’s prized turntable and surrounded by high stacks of worn vinyl jackets.

The band recently returned from a short tour for which they packed themselves and all of their equipment into a small minivan and traveled as far as Toronto, Canada.

“We played really great shows,” Mackin said. “We haven’t really toured in a couple years, and it was really cool to go out on the road and catch up with old friends and make new friends.”

After their 2015 self-release Watermelon Summer, Annabelle Chairlegs defined themselves with a strong sense of direction, reaching into the realm of psych rock and picking up a few elements of punk, pop and blues. Their debut feels anything but amateur, masterfully adopting reverb and delay effects in their short yet punchy tracks.

“We all kind of come from a wide range of background,” Mackin said. “The psych rock thing is overused. I feel like we just play rock’n’roll.”

“It’s hard to say where the inspiration comes from,” bassist Derek Strahan said. “We all like the Grateful Dead a lot (now), but it was garage rock a few years ago.”

Despite their growing popularity, the band’s members told me they continue their full-time day jobs serving pizza and juicing fruit during the day and refining their tunes on Tuesday nights.

“We pretty much have an album and some change that were ready to record,” Mackin said. “We want to be able to take a step back from recording it ourselves and, like, really play. It’s just weird for us to ask someone else to do it — it’s kind of scary to trust anyone else.”

As the band geared up for their rehearsal, guitarist Matt Schweinberg switched on their tape machine. Each individual took up a corner of the room, facing each other as they lurched into “Silent Spring,” a rockabilly tune with a twist. Drummer Billy Wong set the tempo for the others as the new song sped into an uncontrollable vortex, freeing the quartet into a spontaneous jam.

After a few notes, they start again with “Brain Freeze,” diverging from the bite-sized pieces of Annabelle Chairlegs’ debut, taking its time and letting its listener indulge in its grimy tones. The band’s roommates sat on the sidelines, passing around a box of pizza and soaking in the sounds. Schweinberg utilized a slide on the track, hinting at the band’s Texas influence and adding a new tool to their repertoire.

Annabelle Chairlegs will be at a number of shows and venues across Austin in the next few months. Trekking forward, the band hopes to continue making music, not expecting much else than wanting someone to drive them from show to show.

“We want to put some albums out, we want to travel the world,” Mackin said. “It would be cool to have all these pockets of time from over the years and all this shared experience.”

As the ensemble continues to mature and refine their sound, they move closer and closer to one of those names on their walls. Doubtless, Annabelle Chairlegs defines the East Austin sound with their DIY upstart approach.