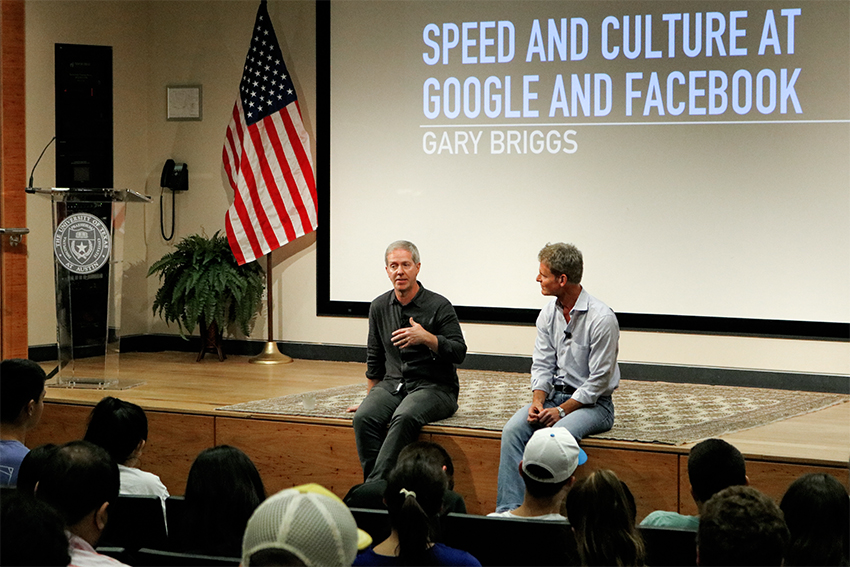 Gary Briggs, chief marketing officer of Facebook since 2013, spoke Thursday on campus about how he broke into the world of big business through personal connections and pursuit of his passions.

“Share a beer, it’s good practice,” Briggs said. “It’s basically all (about) personal connections with people I’ve worked with along the way.”

Briggs, a former eBay, Pepsi and Google employee, said he learned that the tangible benefits of a startup are not solely economic after starting a business with two of his friends in 1999.

“We eventually sold the business to Amazon, not for a lot,” Briggs said. “That was not a success, I would say. It turned out to be a really great experience from the standpoint of ‘I learned a ton about online marketing in that area.’ When I went into eBay, I was very comfortable with doing a lot of online deals.”

People frequently ask what it’s like to work with Mark Zuckerberg, Briggs said.

Facebook has dominated social media and stayed at the top thanks to a strong engineering and sales team, Briggs said.

“About one in five (minutes spent on social media) are spent on Facebook,” Briggs said. “Average usage is about an hour a day, globally.”

Mark Bunting, an advertising professor and owner of a Cajun restaurant who helped facilitate the discussion, talked about the benefits Facebook provides for small business owners. He praised Facebook’s advertisements, which are generated based on what the user had been searching for online. Bunting also said he appreciates the “check-in” aspect of Facebook.

“If I want to identify people with a Louisina heritage … I have the ability to not only find those people but track whether or not they come to my store,” Bunting said. “This wasn’t in the hands of small businesses before.”

Briggs’ general tips for entrepreneurship included going after something you are truly passionate about and hiring people you can trust to do their jobs.

Public relations sophomore Janelle Sosa said what stuck with her from Briggs’ lecture was his statement on the importance of networking and being remembered.

“I definitely think (networking) is important,” Sosa said. “All of us being at UT, we’re all sort of heading for the same goal, but at such a big school, it’s important to make a name for yourself and find some way to stand out.”