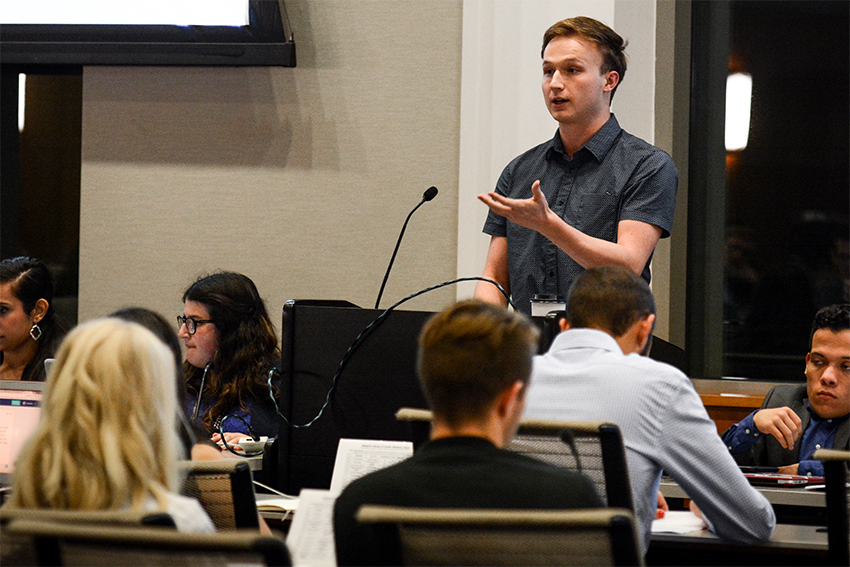 The Senate’s decision was based upon the opinions collected in a survey of students conducted this semester by the Senate’s College Tuition Budget Advisory Committee.

“Our recommendation is essentially calling for no increase in tuition based on the fact that students … (told us) they didn’t have enough education about the tuition process … (and) couldn’t afford a tuition increase,” Senate president Austin Reynolds said.

The survey received 5,573 responses from students. To the question of whether or not they supported a tuition increase, 45.92 percent of students responded “definitely not” and 2.01 percent answered “definitely yes.”

“We had some very insightful comments as to why students answered the way that they did,” said Reynolds, an English senior. “Some of (it was) not so insightful, such as ‘Nah son,’ where more (useful) feedback was, ‘I can not afford an increase in tuition, I would literally have to drop out of school. My financial aid is limited, and Austin’s housing crisis is rapidly increasing.’”

The Tuition Policy Advisory Committee, which announced the proposed increase, explained to the council why it believes the increase is necessary. Mary Knight, University finance associate vice president, said they would take the students’ input back to the TPAC president, who will take it into consideration before addressing the Board of Regents when it considers increasing tuition.

“The preliminary recommendation of 2 percent was an early discussion, because we were looking at a modest increase to help with the budget issues that we’re having,” Knight said. “Some of it will go to faculty and salary increases, some of it for scholarships, some of it for Provost and President initiatives and priorities. It’s not just going to any specific item.”

The Senate’s recommendation is still in progress, Reynolds said, but when complete, it will be sent to President Fenves and other relevant University administration.

“The quantity of responses shows that there is huge student enthusiasm for getting our voice to Fenves,” said Plan II senior Trevor Heise, who attended the meeting Thursday. “If the Senate can be a conduit to that, then I’m pleased they are taking on that role.”