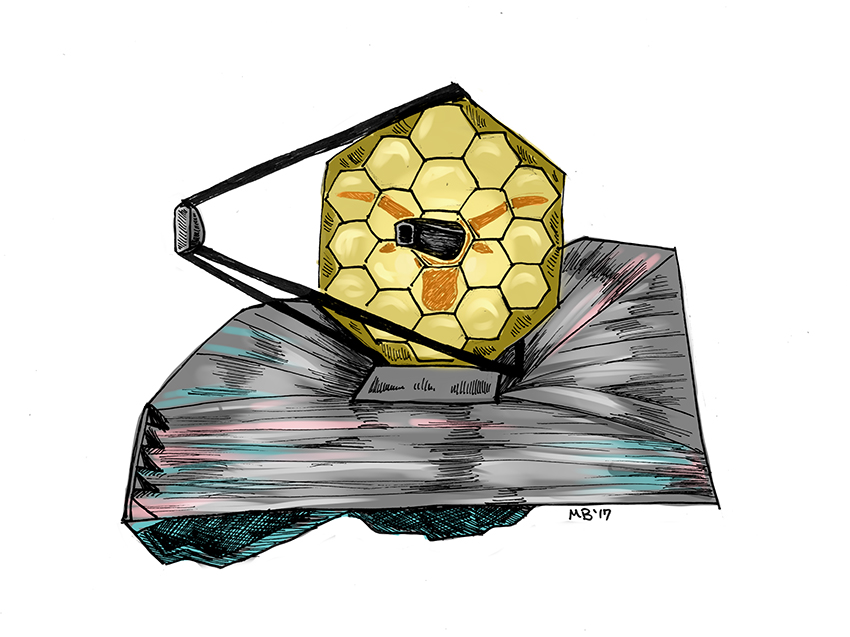 In a worldwide competition, several UT faculty members were selected to be the first to work with the new James Webb Space Telescope, which will be the largest telescope to ever be sent into space.

The Space Telescope Science Institute received proposals from 106 teams across 10 countries, all vying to get their hands on the largest telescope launched into the cosmos. Thirteen programs were chosen, of which UT astronomers are members in five and leading one.

The size of the telescope is not the only reason scientists are clamoring to get at it. It is capable of infrared light imaging, which is vital for clearer images of galaxies, said Steven Finkelstein, the only UT scientist leading a program. The James Webb telescope is considered the informal successor to NASA’s Hubble Space Telescope, but Finkelstein said it is seven times bigger than Hubble.

“Because this telescope is so much better than Hubble … we don’t know what we’re going to find,” Finkelstein said. “We’re going to be the first ones to get to look at the images, so I think there’s a pretty high chance we’re going to learn something new about the universe, something majorly new that people haven’t seen before.”

The worldwide competition, which closed in August, determined which astronomers would have access to the new telescope in its first run. Still a work in progress, the telescope will not be launched until the spring of 2019.

Until then, Finkelstein’s team has preparation to do for his project, which will examine far-away galaxies to determine how they evolved in the universe. He said his proposal was chosen as a finalist partly because it involves collecting data that can be applied to help other astronomers around the world. This is the first time Finkelstein has led a major project.

Kristen McQuinn is a research scientist at the McDonald Observatory and a leading member for a different program. McQuinn said in addition to conducting actual science upon the launch of the telescope, the team will also be developing new resources in anticipation for the launch that may help future endeavors.

“We’ll be developing some of the tools to help the community, and it will set us up really well to be maximizing and optimizing the use of the telescope,” McQuinn said. “It’s a very exciting thing, to be part of this first wave.”

Involvement with the largest telescope in space is not enough for the UT astronomy department — they will also aid in constructing the largest telescope on the ground in 2023. UT is a 10-percent partner in building the Giant Magellan Telescope, which will stretch to over 25 meters wide, four times larger than the James Webb, said department chair Shardha Jogee.

McQuinn said although the involvement in the James Webb telescope brings honor to the UT astronomy department, she is mostly just excited for the opportunity to work on new science.

“It’s a high-profile thing to be a part of,” McQuinn said. “But really, we’re in it for the science. That’s what’s driving most of us, I think. It’s something we’ve never been able to do before, and that’s really exciting.”