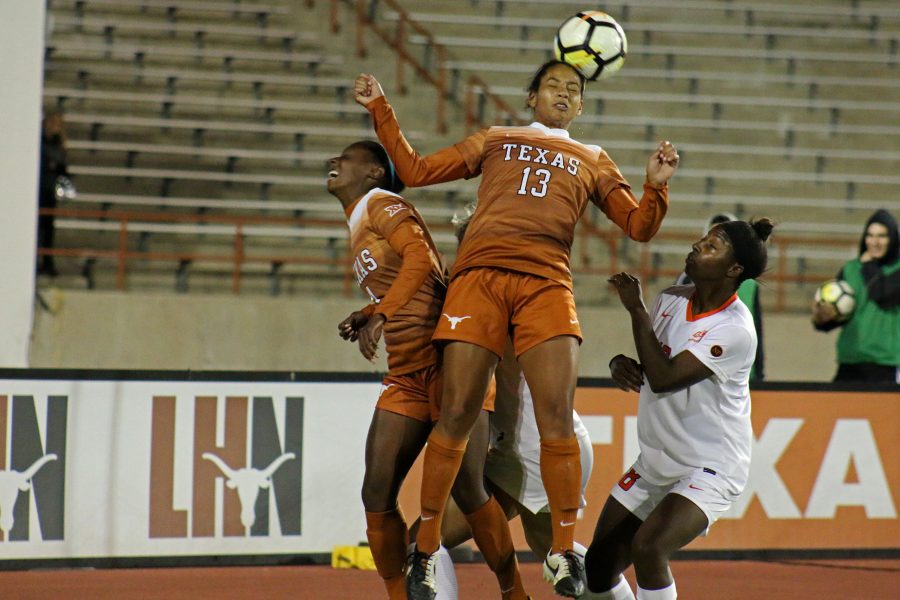 The magical campaign of 2017 rolls on for Texas as it heads to the Sweet 16 after sneaking past Clemson on penalty kicks.

“(I’m) just really excited for the squad, throughout the course of the season every single challenge they’ve been meeting it and exceeding it,” head coach Angela Kelly said.  “This is a huge step for our program to get back to the Sweet 16 and it’s just a really big step and I’m just really proud of the team.”

Squaring off at Koskinen Stadium in Durham, North Carolina, the Longhorns prevailed in yet another battle of wills following a scoreless defensive first half that resulted in just one shot on target for both teams.

Any goal scoring opportunities from the dangerous duo of freshman forward Haley Berg and sophomore Cyera Hintzen were erased with the disciplined line of defense along the Tigers midfield and defensive front.

With zero first half moments to capitalize on, Texas managed to create one in the second half, finding a through ball to Cyera Hintzen 61 minutes in at the top corner of the 18 yard box. She skillfully chipping it over the Clemson keeper for her tenth goal of the season.

Following such a key second half goal in NCAA tournament play, Texas looked to avoid giving up a gut-wrenching late-game goal like they did against Baylor in the Big 12 championship a few weeks back.

The Longhorns defense had been stout for most of the game, but fatigue began to wear as Clemson’s offensive attack led by freshman forward Mariana Speckmaier began to break down Texas’ wall of defense.

Texas succumbed to the pressure with less than five minutes to play in regulation, as Speckmaier crossed a ball that was deflected mid-air by junior forward Patrice DiPasquale, leveling the game 1-1 as regulation came to a close.

Coming into the NCAA tournament 5-2-2 in overtime periods, Texas was no stranger to playing extra minutes. However, what changed on this occasion was a date with the unpredictable phenomenon of penalty kicks.

Holding a 6-5 lead going into Clemson junior defender Sam Staab’s penalty kick, it was do or die for the Tigers against Texas’ standout keeper Nicole Curry.  Staab’s right-footed shot in the left corner of the frame was denied by Curry, sending Texas on to the third round to play the No 1. seeded Duke Blue Devils.

“She’s made some really big time saves and been really steady back there for us,” Kelly said on Curry’s play.  “I told her when we were heading out to PK’s (penalty kicks), I said, ‘Nicole, you’re just going to need to save one,’ and that’s what she did.”

Duke demolished Oklahoma State 7-0 in their second round matchup Friday night, setting Texas up for very easily their most formidable foe on Sunday.  The Blue Devils have only lost two games all year long, both times to No. 2 North Carolina.

The Longhorn team has proven before it can compete with top programs, but Sunday against the Blue Devils for an away game will be a tough test.