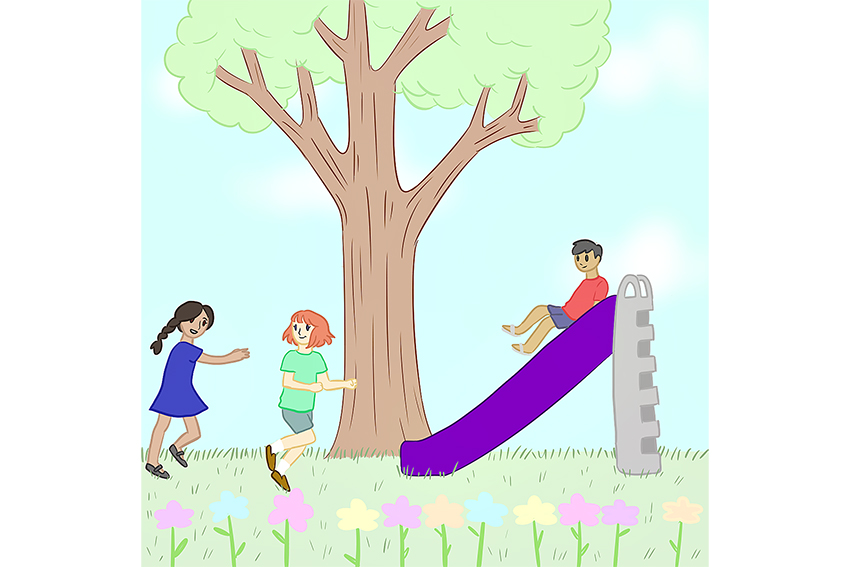 While classrooms have been moving toward more technology and less recess time, research suggests that creating greener schoolyards, or adding nature elements to schoolyards, instead may improve children’s mental and physical health.

Stephen Pont, the medical director at the Dell Children’s Medical Center’s Texas Center for the Prevention and Treatment of Childhood Obesity, collaborated with Children and Nature Network, a nonprofit that aims to reconnect children with nature. After conducting a review of literature, Pont summarized the findings and created a database that is more easily accessible and understood by school officials interested in making their schoolyards greener. The abstract was presented at the American Academy of Pediatrics National Conference in September.

Schools may question the point of devoting resources to creating green schoolyards, so this database can help answer those questions, Pont said.

“(The database) demonstrates the impact that exposing kids to nature (such as through) green schoolyards,” Pont said. “It actually improves academics, health (and) physical fitness. It can decrease behavioral problems, increase cooperative play, and there’s all these benefits that we can show.”

Green schoolyards have wide implications for children’s mental health, according to Richard Louv, one of the founders of Children & Nature Network.

“The research indicates that experiences in the natural world appear to offer great benefits to psychological and physical health and the ability to learn,” Louv said. “The studies strongly suggest that time in nature can help many children learn to build confidence in themselves (and) reduce the symptoms of attention deficit hyperactivity disorder, calm them and help them focus.”

“In encouraging kids to be healthy, (and in particular for obesity), we have to think of ‘stealth health’ approaches, where the kid is becoming healthy without knowing it,” Pont said. “So put a kid into nature and provide them with some health snacks, and childhood obesity can pretty much take care of itself. Green schoolyards are one way to encourage this connection with nature that can have this important positive health outcome.”

Schools that incorporate greener schoolyards can also tailor those schoolyards to address particular areas of health.

“If you think of an urban schoolyard with (a lot of) concrete, you can think of having a vegetable garden to improve nutrition education, rainwater conservation (systems) that may focus more on water management … (and) community space to help family engagement,” Pont said. “So (there are) different ways to help the planning and evaluation of schoolyards.”

Introducing green schoolyards into schools has had positive results, according to Louv.

“I visited a nature-based elementary school in a lower-income region of a county in Georgia,” Louv said. “The school is showing more academic improvement than any other school in that county. The kids were generally healthier as well.”

In order to encourage schools around the country to adopt greener schoolyards, Louv said that schools must make a lot of cultural changes. This includes educating teachers about the benefits of nature exposure at a time when most schools are moving toward adding more technology to the classroom and cutting recess time.

Louv also said professionals can collaborate across disciplines to transform their cities into greener, more child-friendly spaces. Louv’s initiative to improve children’s access to nature targets cities such as Austin.

“In Austin, the (Children & Nature Network’s Cities Connecting Children to Nature initiative is) also working on a template that can be used in other cities to recognize the value of utilizing school campuses as community parks,” Louv said. “That … increases access to nature in cities.”