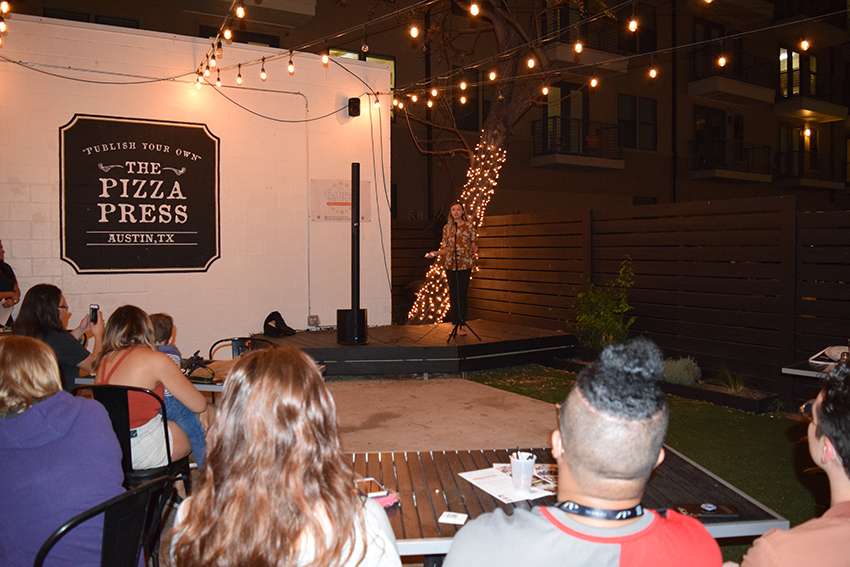 Kelly Woodworth does not have a fluency disorder, but on Friday, she voluntary stuttered as she recited her poem to understand what her clients
feel like.

“This is called choice — we all have it, right?” speech language pathology senior Woodworth said. “I chose to voluntary stutter today. I typed out what I wanted to say, printed it out and underlined every sound that I chose to stutter on. It was like picking which battles to fight.”

Woodworth was one of the speakers at a poetry night hosted by the Lang Stuttering Institute Student Leadership Organization. The speakers included both people who stuttered and people with no
stuttering problems.

The event’s purpose was to share personal stories of stuttering and belonging, said Woodworth, the
organization’s president.

“Whether it be people who stutter or people who don’t stutter, we want to show that we do have similar experiences,” Woodworth said. “Whether it’s being treated unfairly, or overcoming stereotypes or overcoming fear, we all have something that we can share. We want to give people that space to
feel comfortable.”

Speech language pathology senior Madison Houston shared her story about being afraid of going on a mission trip to Cuba and encouraged the audience to choose love
over fear.

“Every decision that we have, every opportunity we might have is a choice to be fearful or be loving,” Houston said. “I realized that in this field of being a speech pathologist … I can serve people and I can love people in all this different ways. I have this opportunity to thank (for opening my eyes) … I really want to do that.”

Jacqueline Silva, a speech language pathology senior and LSI SLO membership coordinator, said through the event, they hoped to dispel myths of stuttering.

“We don’t want people to think that they’re just nervous and cut them off or something,” Silva said. “And if we spread that amongst everybody, it will be a closer community and allow everyone to feel more comfortable.”

Courtney Byrd, founding director of the Michael and Tami Lang Stuttering Institute, spoke at the event, applauding the work of the organization.

“Many of them … do not stutter themselves,” Byrd said. “So it takes a rare kind of empathy to really take on a cause that’s not something you’ve experienced but one that you can feel in your heart.”