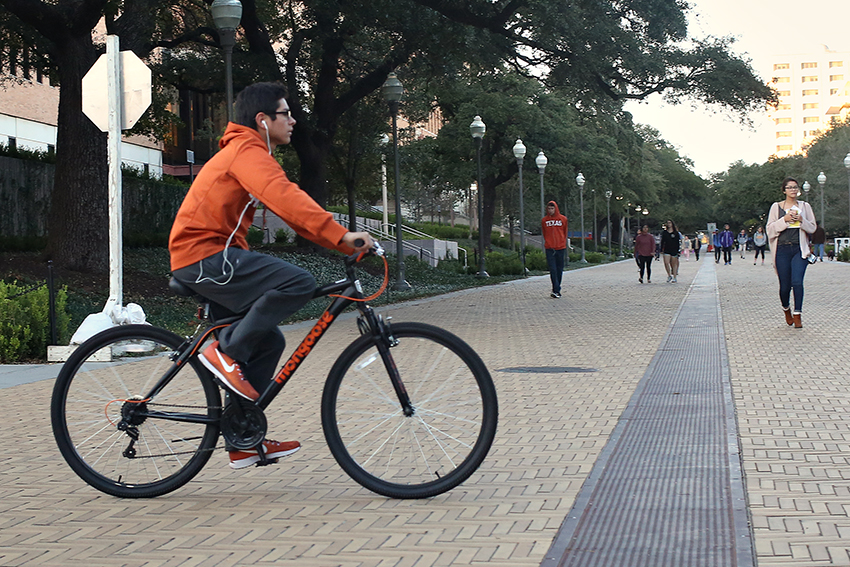 For bikers navigating construction on campus, getting to and from class can seem a little bit like driving in rush hour on Mopac. With decreased path space corralling pedestrians and bikers into the same areas, students are suggesting that construction detours include bike lanes to organize traffic flow.

The construction on Speedway Mall takes up half of the street in one of the busiest areas of campus. With hundreds of students shuffling in-between construction barriers, bikers often have trouble navigating the clogged roads.

Students like radio-television-film junior Ukairo Ukairo are taking to the internet to raise awareness of conflicts between pedestrians and bikers in shared spaces on campus. Ukairo, a biker, made a semi-satirical video highlighting the issue.

“If we had bike lanes that pedestrians weren’t allowed to get on … it would be clear, (and) it would be a good way to keep accountability at all times,” Ukairo said. “Now, I understand that with construction going on it might be difficult to achieve, but it’s something we have to think about long-term.”

Construction on the Speedway Mall project began in the fall of 2015 and is expected to be completed in the spring. However, construction crews had to begin additional construction on the street last month after discovering that some of the bricks laid down for the project were not properly stress-tested and needed to be replaced.

Ukairo said the stretch of construction on Speedway is the most difficult to navigate, a sentiment that is shared by other UT students.

“On Speedway, with all that construction, it’s a little cramped with one side where both the bikers and pedestrians are,” undeclared sophomore Autumn Flores said.

Medical laboratory science freshman Sandra Diaz said Speedway is the main problem area on campus, particularly near Gregory Gym. She said the school should put designated biker lanes in the area because there is a risk of students getting hit.

“Sometimes (bikers) pass by really fast,” Diaz said. “My friend actually got hit once … this biker just came by right next to her.”

The University was not immediately available to comment on the feasibility of adding bike lanes to construction areas.

“I think that a root cause of the biker (and) pedestrian problem is a lack of understanding about community living, community space (and) the rules of a shared community space,” Ukairo said. “I know there are other bigger challenges (in) the world, but you can start with these small ones and build up to the bigger ones.”