Bowl berth the crucial accomplishment for this year’s senior class 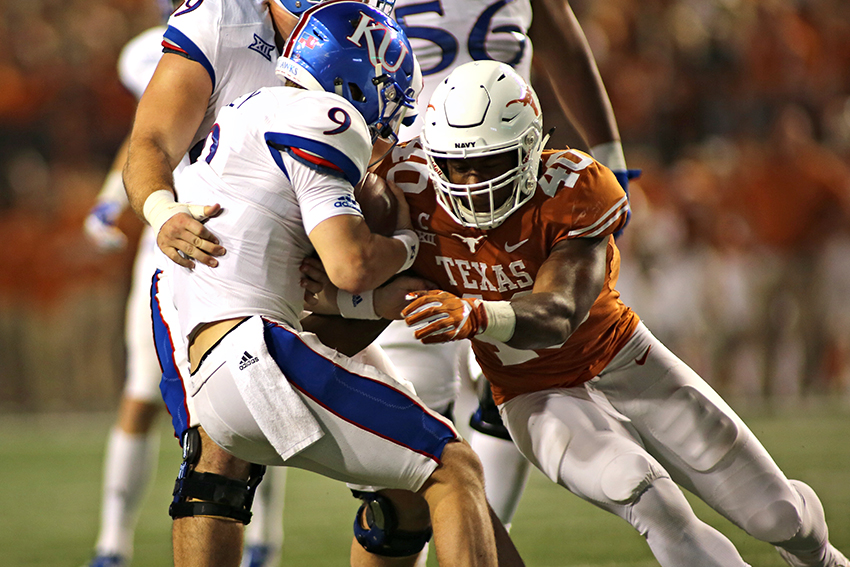 It’s been especially hard the last few years for the Longhorns who have been on the roster for three straight losing seasons. This year’s senior class has been through one of the worst stretches in the history of the program. Before Saturday’s win over West Virginia, Texas hadn’t been bowl eligible since 2014.

“This whole goal was to get to a bowl game this year,” senior wide receiver Lorenzo Joe said. “That’s something that we’re gonna remember. And especially these younger guys and recruits coming in, they’re gonna see that and hope they just keep on building off of that.”

“That was an awesome moment … people were dancing around excited,” Joe said. “And especially for us seniors, that was our last road game, so it was a pretty special moment.”

There was plenty of celebrating and breakdancing going on in the Longhorns’ locker room on Saturday. Texas even released a special video on social media documenting some of the postgame locker room partying.

In the video, Herman was hoisted onto players’ shoulders as he attempted to dab. Other players could be seen busting moves that could’ve easily passed for the local disco.

It’s easy to understand why Saturday’s win was a big one for the Longhorns, not just because it clinched a bowl berth for the first time since 2014, but also because it gave this senior class something positive to hang its hat on as it exits the 40 Acres. The seniors have experienced more frustration than they had ever envisioned.

There are three seniors in particular, fifth-year players who redshirted in 2013, who are the only members of this year’s roster to have ever experienced a winning season at Texas. The Longhorns went 8–5 in former head coach Mack Brown’s final season on the 40 Acres.

The three individuals still left from that year are linebacker Naashon Hughes, defensive back Antwuan Davis and kicker Mitchell Becker.

“I’ve seen a lot of change,” Hughes said. “I’ve seen pretty much the most change I think any college player has seen. But I mean, some of it’s been for the good.”

Hughes said he spoke with his brother the other day about his Texas career coming to an end, and it hit him.

“Yeah, this is it for me,” Hughes said. “I got like a month or two left and then I’m no longer a Longhorn. That’s pretty scary to think about.”

Hughes and the rest of his senior teammates will play in their final game at Darrell K Royal-Texas Memorial Stadium on Friday night when the Longhorns host Texas Tech.

Senior night games always signify a changing of the guard to some extent. But that rings especially true for this year’s class, which has lost a lot of games in its time in Austin.

“The looks on some of these kids’ faces, especially the older ones, in that locker room Saturday after the game was priceless for a coach, knowing what they’ve been through around here,” Herman said. “But they also know, finishing 6–6, that’s average. We want to make this legacy and the jumping-off point of this new chapter in Texas football better than average.”