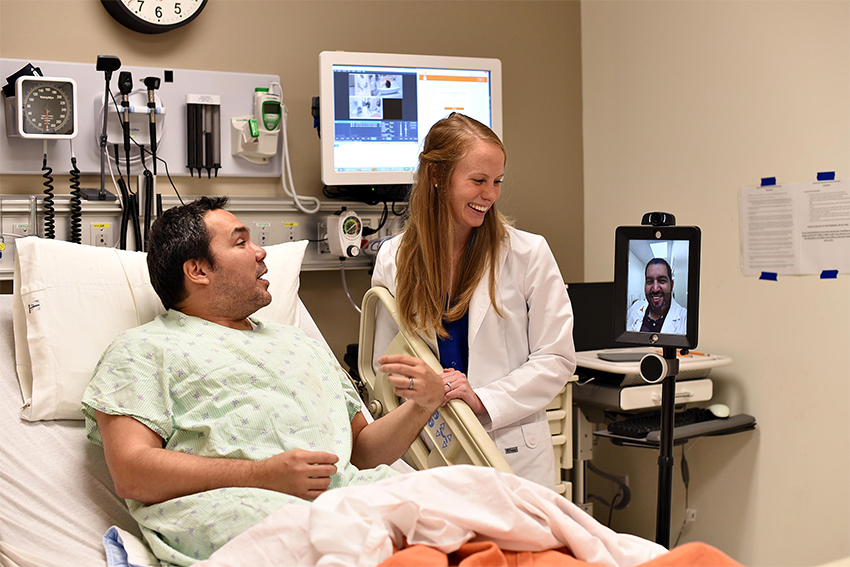 Courtesy of School of Nursing

The School of Nursing is now using a “robot nurse” to give students more experience in the growing field of telemedicine, over-the-phone or online interactions with health care providers.

The Robo-Advanced Practice Registered Nurse (RoboAPRN) came out of a $9,764 grant from the UT-Austin Faculty Innovation Center. RoboAPRN allows students to experience interacting with patients without being in the same room as them through videoconferencing.

“In layman’s terms, it’s an iPad on a stick that you can drive around,” said Valerie Danesh, assistant nursing professor and co-principal investigator for RoboAPRN.

RoboAPRN is a form of remote presence, a type of telemedicine that allows health care providers to evaluate patients regardless of distance separating them. The robot is about the same height as the average person so as to give the appearance and feel of speaking to a health care provider as if they were in the same room, Danesh said.

In rural areas, remote presence is quickly growing in importance because of the low access to health care, said Donna Rolin, assistant professor of clinical nursing. With remote presence, health care providers will be able to more directly assess patients without having to travel hundreds to thousands of miles to rural areas or areas that lack certain health care specialists, Danesh said.

The School of Nursing added telemedicine skills to its Psychiatric Mental Health Nurse Practitioner program after the need to reach patients in largely rural areas became obvious, according to a press release from the school.

“These patients are underserved in so many ways,” Rolin said. “They’re the last patients that get served, often times, and they’re the ones with a lot of the highest level of needs.”

Rolin said one of the other issues rural patients face is that they are few and far between and many of them rely on Medicare or Medicaid, so it is not economically feasible for health care providers to set up private practices in these areas. Due to this, telemedicine and remote presence is critical to ensure these patients still receive the care they need, Rolin said.

If the school had not received the grant to pay for RoboAPRN, Rolin said they had started preparing to use other less sophisticated forms of the technology, using a combination of iPads and video conferencing to create the same effect as RoboAPRN.

“We were going to do … kind of ‘fake’ telemed technology,” Rolin said. “It would be more simulated than it actually is through the technology we were able to acquire with the grant.”

Scott Hudson, School of Nursing director of simulation and skills labs, said because telemedicine has become such a large part of the healthcare field, it is increasingly important for them to give students as much experience as they can to prepare them for what they will see after they finish school.

“Anything we can do to make their experiences more meaningful and more realistic … is a boon to the students,” Hudson said.

Hudson said practicing with RoboAPRN gives students a safe environment to practice working as a healthcare provider without fearing the consequences of making mistakes.

“It’s a safe setting for them,” Hudson said. “They can make a mistake, and then they can look at it, and they can try it again and not make the same mistakes again, so they’re learning from that.”