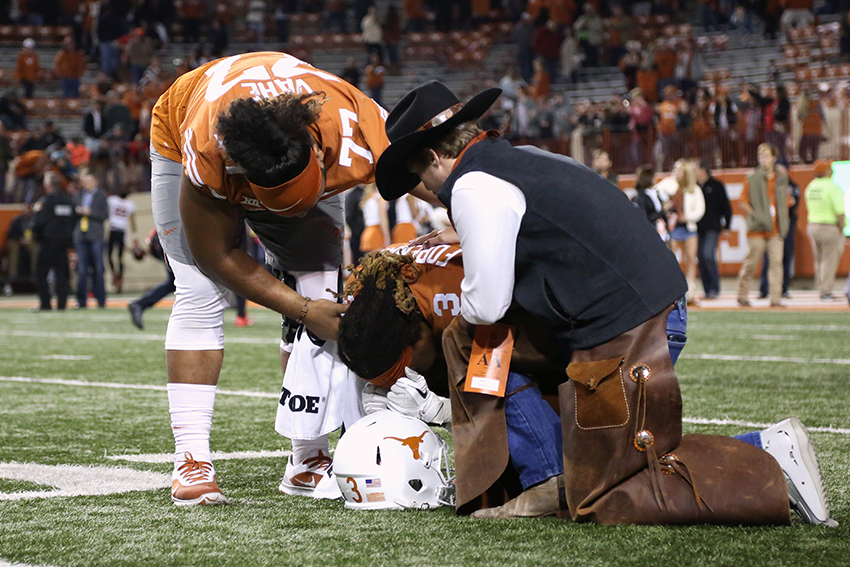 Texas Tech players stormed the field on Friday night while one Red Raider ran across the turf carrying a bright red flag that pierced through Darrell K Royal-Texas Memorial Stadium.

Longhorn players watched on as the Texas Tech sideline celebrated after spoiling Texas’ senior night. Several Longhorn players were seen laying on their backs, some threw their helmets in frustration, but most had the same, stunned look on their face.

Head coach Tom Herman and his team left Darrell K Royal-Texas Memorial Stadium for the last time this season and were forced to accept that they let yet another close game slip through their fingertips.

“I’m still stunned,” junior linebacker Malik Jefferson said. “I’m just trying to get over that hump. It’s just super frustrating. I know how hard we work and everything we’ve done this whole year to achieve something and create a foundation for the future … 6–6 is not what we wanted to be. We should've won a lot more games. It’s very frustrating.”

Texas’ 27-23 loss to Texas Tech marks the Longhorns’ fourth loss by five points or less this season. But as the burnt orange look forward to bowl season, the only numbers that will be seen is their record: 6–6.

Texas Tech’s win over Herman and the Longhorns caught the Longhorn faithful off guard. The Red Raiders’ victory comes less than a week after Texas’ 28-14 victory over then-No. 24 West Virginia.

Herman was emotional following the game and during his press conference with the media on Friday night. Even he couldn’t explain Texas’ inconsistency issues and how his team went from the highs of beating a ranked team on the road and earning bowl eligibility to losing to a previously 5–6 team at home.

Amongst the last few players to leave the stadium was junior linebacker Malik Jefferson, who has yet to announce whether he will return for his senior season or opt to enter the 2018 Draft. But he made sure to do one thing before leaving the field.

With a handful of people remaining in the stadium, Jefferson stopped and kissed the white Longhorn logo on the burnt orange carpet of the tunnel. Then, Jefferson continued up the tunnel and left Darrell K Royal-Texas Memorial Stadium for what many believe was the last time.

“It's gonna be a hard decision because I look in the locker room, I look at those guys to the left and right of me and I just smile because I love the things that we’ve been through,” Jefferson said. “It’s been a tough past three years and guys understand the love that I have for them … I just didn't want to take any regrets or miss any opportunities that I have for this stadium and the love of these fans.”

Although Texas won’t play in Austin until next season, the Longhorns still have one game remaining. Herman admitted it was a bit tougher to reflect on the improvements within the program after the stunning loss.

But he did find a silver lining.

“The silver lining in all of this is that it’s not the last time these seniors will put on the burnt orange and white,” Herman said. “We have an opportunity to go play in a bowl game for the first time in three years here. We are dead set in making it our mission in life to make sure that these seniors go out with a positive experience, with a win in the bowl game, wherever that may be.”